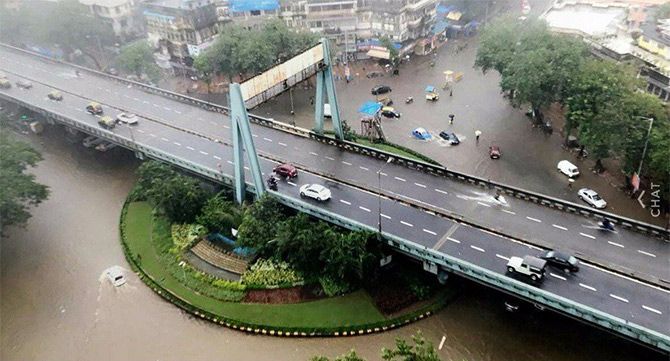 The Met Department today warned of more "heavy intermittent spells" in the next few hours in Mumbai and its satellite cities where incessant downpour has threw normal life out of gear. India Meteorological Department (IMD) Director General K J Ramesh told PTI that the Santacruz weather station, which is in the suburban part of the city, has recorded 8-9 cm (80-90 mm)of rainfall from 8.30 am to nearly 11.30 am.  Maharashtra Government has also issued orders to allow employees to leave office early due to the rain.


"10-15 cm of rainfall in a day is normal for Mumbai. The one the city received on July 26, 2005 was unprecedented," Ramesh said. He also said the IMD office in Mumbai was giving updates to the BMC and the state government at regular intervals. The IMD has already given heavy to very heavy rainfall warning to Maharashtra and Gujarat governments, he said.


Due to heavy winds and downpour since morning, six to seven flights had to do go-arounds while landing, and four to five flights were diverted to nearby airports, including an Indigo Guwahati-Mumbai flight to Ahmadabad, airport officials said. The single runway of the airport was, however, functional. A Chhatrapati Shivaji International Airport spokesperson said there is an average delay of 35 minutes.


"Heavy rains and the strong winds have drastically reduced visibility to very low levels leading to diversions and go-arounds even though the main runway is open," a Mumbai airport source told PTI. Heavy rains lashed the city and adjoining Navi Mumbai and Thane regions, throwing life out of gear.


Image: The Dadar TT flyover this afternoon.
« Back to LIVE