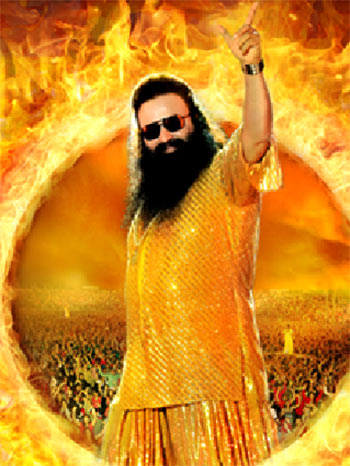 Gurmeet Ram Rahim has not stopped weeping since a special court sent him to jail for 20 years on Monday evening. The 50-year-old chief of the Dera Sacha Sauda, convicted for raping two women 15 years ago, had broken down in court. "I am innocent... please forgive me," he wailed after Special Judge Jagdeep Singh pronounced the sentence.

Prisoner number 1997 - the number was assigned to him since he was taken to Rohtak's Sonaria jail after a guilty verdict on Friday - has been unable to pull himself together, a jail inmate told NDTV.

After the sentence was delivered, Ram Rahim was taken for a medical examination. Then he was given simple prison clothes - a far cry from the glittering outfits he favours - and was lodged in a small cell, alone.

The inmate said jail authorities told him that Ram Rahim was kept secluded for his own safety. Ram Rahim's lawyer had asked that a couple of attendants be allowed to stay with him in view of his health. The 50-year-old reportedly suffers from migraine and backache.

Two senior officers have been assigned for the protection of the VIP prisoner, who had been accorded Z-Plus security by the Haryana government. Two more security staff are keeping guard near his cell.

Ram Rahim has been lodged in an approval cell, which is easily accessible and closest to the administration. The other two kinds of barracks are called special cell and high-security cell.

The inmate said since Friday, Ram Rahim had eaten no solid food. "He drank only some water and milk in between. He did not speak to anyone in jail," said the inmate, who had been out on bail since.  The high-profile prisoner, he said, had arrived in a car.

The self-styled spiritual leader claimed he had film stars, cricketers and politicians among millions of supporters spread across several countries. His sprawling, 700-acre headquarters in Sirsa housed hundreds of followers. On Friday, his 200-car cavalcade to Panchkula court contained more than 25 luxury vehicles.

After the verdict, Ram Rahim had been flown in a special chopper from the court in Panchkula to the high security prison in Rohtak as his followers unleashed a spate of violence across the city, stoning the police and burning cars. The violence spread to the neighbouring states and reached the borders of Delhi and left 38 people dead.

For Monday's sentencing, the Haryana government -- which had been accused of underestimating the scale of violence that could follow - had arranged for multi-tier security. More than 4,000 police and paramilitary forces had been stationed across the town. The army had been put on stand-by.
-- NDTV
« Back to LIVE
Business emailOffice email AppDomain registrationWebsiteRediffmailMoneyCompany emailOnline ShoppingBooksGiftsVideosBlogsBuzz