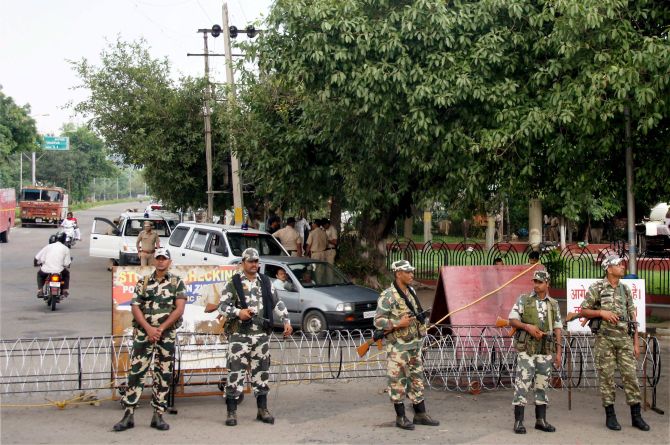 The Army was called out in Sirsa today, ahead of a court verdict in a rape case against Dera Sacha Sauda head Gurmeet Ram Rahim Singh, even as security was tightened, with senior police personnel carrying out a flag march outside the the sect headquarters in the district.

The move comes hours before the verdict by a Central Bureau of Investigation court in Panchkula where the sect chief will appear in connection with the case today.

Army columns also arrived in Panchkula past midnight as scores of Dera followers gathered in the town ahead of the verdict.

"Two companies of Army from Hisar district have been called out to maintain law and order in Sirsa," a top police officer said.

"Police carried out flag march outside Dera headquarters, led by top officials. Security has been beefed up to maintain law and order in the district," he added.

A Dera spokesperson had yesterday claimed that around five lakh followers have arrived in the sect headquarters in Sirsa.

Fearing trouble, especially if the verdict goes against the controversial Dera chief, thousands of jawans, including 15,000 paramilitary troops, have been deployed in sensitive areas across Punjab and Haryana.

The Haryana Police assisted by central forces were involved in an operation to flush out scores of Dera followers even as the sect head made a video appeal to his followers to go back home.

The Chandigarh Police, meanwhile, warned Dera Sacha Sauda followers of stern action if they try to enter the Union Territory.

"No Dera follower will be allowed to enter Chandigarh," the police said in a statement.

"If they (Dera followers) try to enter Chandigarh, stern action will be taken as per the law," officials said. -- PTI