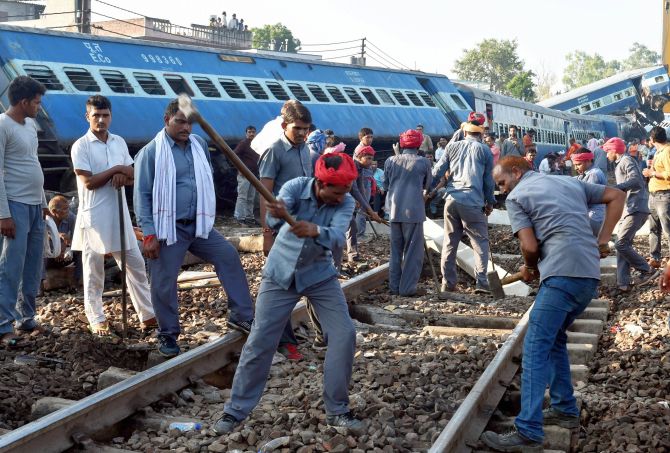 A senior railway official today said a preliminary probe has found that maintenance work was being carried out on the tracks where multiple coaches of the Utkal Express derailed yesterday.
"Some maintenance work was going on, which might have cause the derailment of Utkal Express," said Mohd Jamshed, Member Traffic, Railway Board, at a news briefing today.
The senior official, who rushed to the spot in Khatauli where the accident occurred, said he had seen maintenance tools on the tracks.
"There is an audio clip of of a conversation that we will probe. Also, when we did a site inspection, we saw some equipment of the railways used for track repair present there," he said.
At least 21 people were killed and 97 injured, 26 of them grievously, in the derailment, the railways said.
"It is being said that some work was being carried out at the site and in that work the required precautions were not taken," Jamshed said.
An initial report will be submitted to the ministry by this evening, he said.
He said the railways has instituted an enquiry to be conducted by the Commissioner, Railway Safety, Northern Circle. The probe will begin tomorrow, he added.
"As per the directions of the railway minister, strict action will be taken against those found guilty prima facie," he said.
"Commissioner Safety will ascertain what type of maintenance work was being carried out on the track in his detailed probe. He will also find out whether laid down rules were followed," he added.
Image: Workers repairing the rail track after the Puri-Haridwar Utkal Express train derailed in Khatauli near Muzaffarnagar, on Sunday. Photograph: Shahbaz Khan/PTI Photo
« Back to LIVE