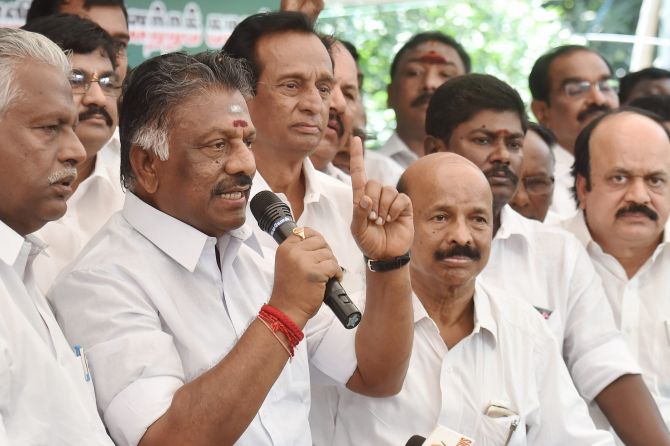 Rebel All India Anna Dravida Munnetra Kazhagam leader O Panneerselvam today said talks on the merger of factions led by him and Chief Minister K Palaniswami have moved a step forward and a "good" decision would be reached shortly.
"I had informed that the merger talks are already progressing smoothly. It has progressed one more step...A good decision will be attained shortly as desired by you," he told reporters in Rajapalayam after a meeting with his party functionaries.
Yesterday, Panneerselvam had said that talks on the merger of the factions were going on smoothly and a positive result was expected in a "day or two".
Palaniswami, too, had said he was confident that "both the factions would merge soon".
In Erode, AIADMK Amma faction veteran and Education Minister K A Sengottaiyan echoed him.
"It will be good decision and it will happen to the liking of the cadres and people," he told reporters referring to the 'positive views' expressed by both Panneerselvam and Palaniswami.
Party sources indicated the merger might fructify tomorrow if an agreement was reached on the question of Sasikala's "formal expulsion," as demanded by the Panneerselvam faction.
There were also some issues like the role envisaged for top functionaries of Panneerselvam camp including K P Munusamy and E Madhusudanan in the unified party, they said.
« Back to LIVE