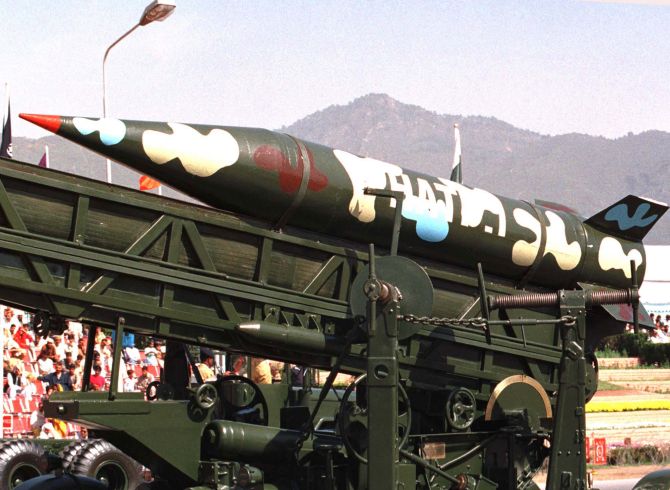 Pakistan has built a 'hardened, secure, underground' complex in a remote mountainous region in the restive Balochistan province that could serve as a storage site for nuclear warheads, an American think tank said on Wednesday.

The Institute for Science and International Security, a nonprofit and non-governmental institution, said its observation is based on satellite imagery and investigation.

It said in a report that the underground complex in the southwestern province 'could serve as a ballistic missile and nuclear warhead storage site'.

The purpose of the complex is not yet available publicly.

But, the report authored by David Albright, Sarah Burkhard, Allison Lach and Frank Pabian, said it could serve as a storage site for strategic reserves and hence a means of protecting a counterforce nuclear strike capability.

Given that Pakistan's preferred delivery vehicle for nuclear weapons is missiles with warheads and given the physical characteristics of the site, this site is an ideal, probable storage site for parts of Pakistan's nuclear arsenal, the report noted.

"Although the site is located in the province of Balochistan, which has endured many local insurgencies, Pakistan is likely more focused on having a secure area in a remote mountainous area in the middle of the country, as far as possible from its international borders, including India," it said.

According to the report, the complex has three distinct entrances and a separate support area and the entrances are large and can accommodate even the largest possible vehicles.

As of 2012, the security was relatively modest, with some possible signature suppression (eg no obvious perimetre security).

"Nonetheless, the site did include at least one possible anti-aircraft position with a guard post at that time," the report said.

"In contrast, 2014 DigitalGlobe images show considerably more physical security in the form of added fencing and checkpoints and several new possible antiaircraft positions. This analysis resulted from a 2014 request from a journalist who provided the coordinates of the ballistic missile base and the mountain site. The person requested that they remain anonymous," it said. --  Lalit K Jha/PTI
« Back to LIVE

How can justice for any woman end like this, asks Bilkis Bano

Bilkis Bano, a survivor of the 2002 post-Godhra riots in Gujarat, on Wednesday said the premature release of all the 11 convicts serving a life sentence in a case related to her and seven family members, has shaken faith in justice and...

The officer said the terrorist's name surfaced during the investigation of an arms dropping case through drone from Pakistan on February 24 in Arnia sector.

Political parties and individuals cannot be prevented from making poll promises aimed at fulfilling the constitutional mandate and the term 'freebie' should not be confused with genuine welfare measures, the Supreme Court said on Wednesday.

Team is slightly nervous ahead of T20 World Cup: Pant

India has not won an ICC event since the Champions Trophy triumph in 2013, and the team is keen to break the drought this time around.