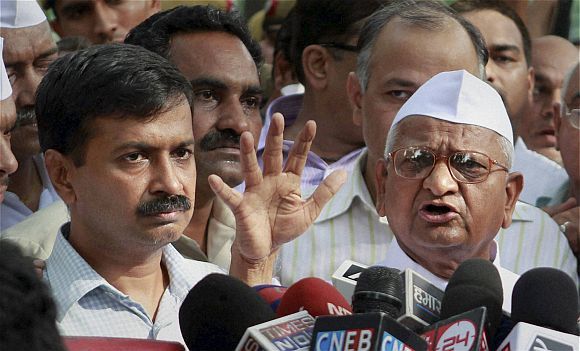 The agitation for Lokpal bill had brought them together. But alleged wrongdoing of Arvind Kejriwal's ministers is distancing him from Anna Hazare.
The social crusader said he would start an agitation against his one-time most trusted colleague --Delhi chief minister Kejriwal -- in the national capital if he got concrete evidence of wrongdoing against Aam Aadmi Party ministers.
Hazare said he did not have doubts about Kejriwal's character. "But his reputation has been damaged because of the people he took in his party to win power. If he wishes to win over the confidence of people again, he should give up power and serve the nation again," he said.
« Back to LIVE