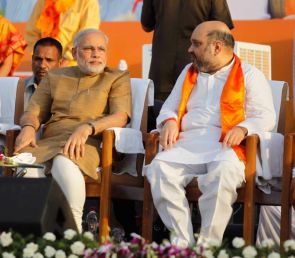 Even as Chief Minister Nitish Kumar is backing Prime Minister Narendra Modi's demonetisation drive, his party the Janata Dal-United on Saturday accused Bharatiya Janata Party president Amit Shah of investing party's huge black money by purchasing land in several districts of Bihar just before the demonetisation announcement made by the Centre on November 8.

The JD-U further alleged that buying land using black money in the name of BJP below government rate to evade tax is a clear case of corruption by topmost leaders of the saffron party.

Holding a joint press conference in Patna, JD-U spokespersons Sanjay Singh, Neeraj Kumar and Rajiv Ranjan produced documents relating to some of the land purchases to buttress their allegations and to 'expose' the BJP's, especially its leader and former Bihar deputy chief minister Sushil Modi's claim that the payments were made through Real-Time Gross Settlement systems.

Ranjan questioned as to what prompted the saffron party to purchase land in the last two months before the announcement of demonetisation policy?

He alleged that by doing so, the central government has breached the secrecy of its demonetisation policy. -- ANI
« Back to LIVE