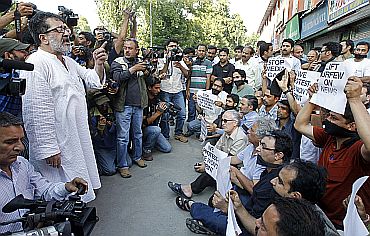 In yet another incident of lawyers obstructing news coverage, a group of advocates at a sessions court in Kochi prevented journalists from reporting the commencement of trial of the murder case of a Dalit woman.
Five journalists were present in the court hall when the lawyers came and asked them to leave, said a journalist, who was assigned to cover the proceedings. Three of the five journalists were women.
The incident occurred a day after the regional committee of Indian Newspapers Society and Kerala Television Federation wrote an open letter to Chief Justice of India T S Thakur, making an appeal to him to resolve the stand-off between media-persons and lawyers in the state.
Image used for representational purposes
« Back to LIVE