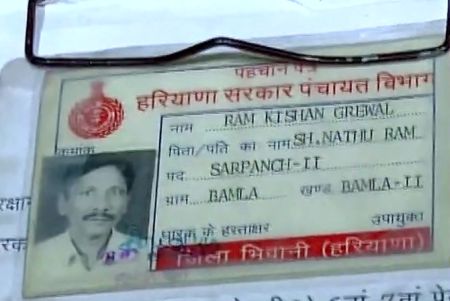 The ex-serviceman, whose alleged suicide led to a huge political showdown with detentions of Rahul Gandhi, Arvind Kejriwal and many other AAP and Congress leaders, had written in his suicide note that "he is giving his life for his country and his fellow jawans".
The 70-year-old ex-serviceman Ram Kishan Grewal from Haryana's Bhiwani district had allegedly consumed poison behind the Jawahar Bhavan, which houses the Ministry of External Affairs, yesterday afternoon.
Police said he along with three of his companions had come to the city apparently to submit a memorandum to the Defence Ministry over the issue of OROP.
Grewal wrote his suicide note on a document he wanted to submit to the Defence Ministry.
He wrote, "I am sacrificing my life for my country, my motherland and for my brave fellow jawans," police said.
In an audio clip of Grewal's last conversation with his son that was aired on news channels, he told his son that "he had consumed poison and was sacrificing for OROP and his fellow jawans who were not getting their due."
According to his friends, Grewal, who served in the Army and the Defence Security Corps for 30 years, had been "upset" over the issue for sometime.
« Back to LIVE