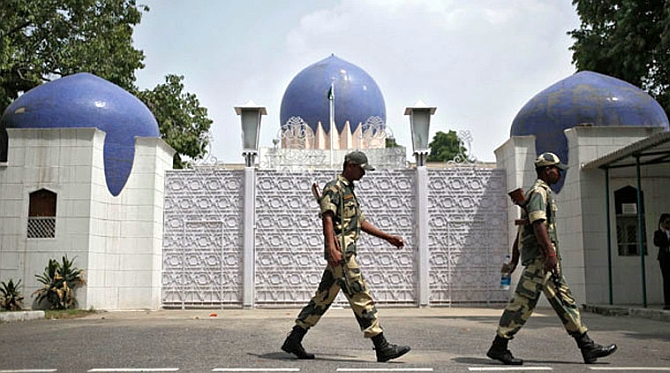 Four Pakistan High Commission officials leave India, reports ANI citing sources.
Dawn News had on Tuesday reported that Pakistan was considering pulling out four officers posted at its High Commission in New Delhi, days after India declared one Pakistani official persona non-grata for espionage activities
The names of the officers -- commercial counsellor Syed Furrukh Habib and first secretaries Khadim Hussain, Mudassir Cheema and Shahid Iqbal -- were made public after a recorded statement of High Commission staffer Mehmood Akhtar was released to the media, the report said.
Akhtar, who worked in the visa section of the Pakistan High Commission and had diplomatic immunity, was procuring critical details including those about deployment of BSF personnel along the Indo-Pak border from two other accomplices who were arrested in Delhi.
Akhtar and two others -- identified as Subhash Jangir and Maulana Ramzan-- were picked up from Delhi Zoo last week. Akhtar was released after around three hours of interrogation as he enjoyed diplomatic immunity.
A fourth person Shoaib, who is a Jodhpur-based passport and visa agent, was detained by Rajasthan police later.
« Back to LIVE