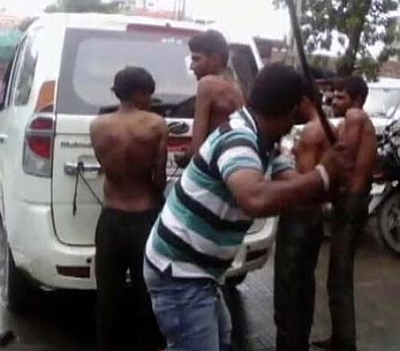 Gujarat's Chief Secretary G R Aloria has said that the accused who had assaulted Dalit men in Una on July 11 in the name of cow protection had video recorded the incident for fun and uploaded it as a show of bravado.
The Indian Express reported that Aloria also admitted there is hooliganism going on in the name of self-proclaimed gau raksha samitis.
"The accused were so brazen that they shot the video for fun and uploaded it as a show of bravado. They were making an example of it. The car of the accused had a board of the Shiv Sena and the accused had a visiting card that suggested they belonged to the Gau Raksha Samiti, Rajkot," Aloria told the newspaper.
"The police are still investigating it. The victims have made a few allegations against the local sarpanch of Mota Samadhiyala. The victims are saying that the sarpanch was objecting to construction activity by the family on land allotted for a common water well, that he called these hooligans to the village under the excuse of gau raksha to beat them up. We are checking this allegation," he added.
Read more HERE
« Back to LIVE

Children dress up as Lord Krishna on the occasion of Krishna Janmashtami.

Following Starbucks's exit from the Russian market following the war in Ukraine, Stars Coffee -- a new coffee shop brand with a similar look and feel as the famous coffee brand from the US -- opened in Moscow on Thursday, August 18, 2022.

India's gold imports, which have a bearing on the country's Current Account Deficit (CAD), rose 6.4 per cent to $12.9 billion during April-July this fiscal due to healthy demand, according to government data. The imports stood at $12...