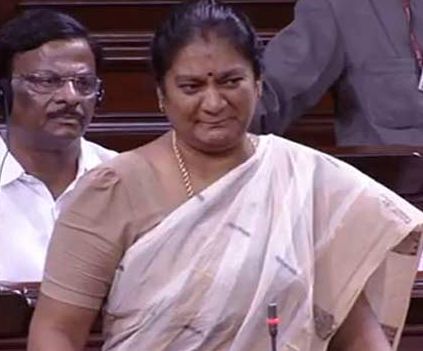 Expelled Anna Dravida Munnetra Kazhagam (AIADMK) parliamentarian Sasikala Pushpa has said it would be wrong to nominate Sasikala Natrajan as the general secretary since she was expelled by late chief minister J. Jayalalithaa for conspiring against her.


"It would too wrong to nominate Sasikala Natrjan as the general secretary of the party. Because nowhere madam (Jayalalithaa) has mentioned her name. She has not even given her a councilor or an MLA seat. It shows that political life is not fit for her. She was earlier expelled by Amma for conspiring against her and trying to kill her," Pushpa told ANI.


By citing a by-law of the AIADMK, Pushpa said, "There is a rule in Class-30 sub clause-5 that a person being a primary member for five consecutive years can contest the elections. However, if this is implied, then, Sasikala is not fit to be the general secretary."


Pushpa demanded a judicial inquiry into the death of Jayalalithaa "since the time she was admitted into the hospital, there was no transparency about the status of her health.""What happened to Jayalalithaa is something everybody is questioning. Even the cadres feel the same," she added.


Sasikala said she has filed a case in the Madras High Court stating that the election of general secretary of the AIDMK be done in a democratic manner.