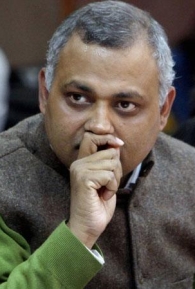 The Delhi police said the recovery of Aam Aadmi Party leader Somnath Bhartis pet dog was key to their probe in a alleged domestic violence case against him filed by his wife.

The pet Labrador, named Don, was alleged to have bitten a pregnant Lipika at the behest of his master, reports The Indian Express.

Where is Don? He is very crucial to our investigation. He is still missing, we need to recover him, the police reportedly said.

Opposing Bharti's anticipatory bail petition in a Delhi court yesterday, police said the recovery of Bhartis pet dog was key to their probe.

Bharti faces arrest after a trial court issued a non-bailable warrant against him in the domestic violence and attempt to murder case filed against him by his wife.