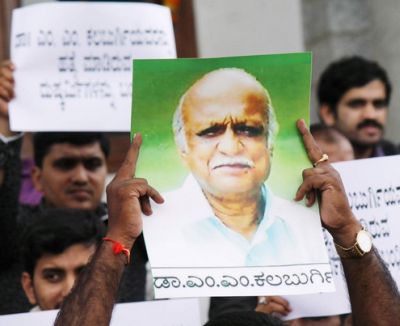 Karnataka Chief Minister Siddaramaiah today said the government has announced Rs five lakh to those who could provide clues about the murder of noted Kannada progressive writer and scholar M M Kalburgi.
The government has decided to give a reward of Rs five lakh to whoever gives information about Kalburgi's murder.
The identities of the informants would be kept secret, he told reporters here after meeting the families of Narendra Dabholkar and Govind Pansare, the rationalists who were killed in Maharashtra, and Kalburgi, who was shot dead at Dharward in Karnataka on August 30.
The families during their meeting with the Chief Minister demanded speedy investigation into the case and were assured by him that the culprits would soon booked.
« Back to LIVE