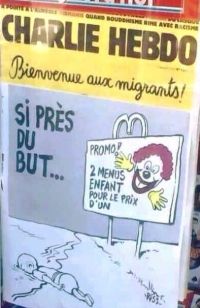 French satirical magazine Charlie Hebdo has been criticised for publishing a cartoon depicting the death of three-year-old Syrian toddler Aylan Kurdi as its own controversial take on the refugee and migration crisis, the media reported on Tuesday.


The cartoon attributed to the publication and circulating on social media features Aylan lying face down on a beach with the words "So close to his goal..." written above him, The Huffington Post reported. In the background a McDonald`s-style Happy Meal Board states, "Two children`s menus for the price of one."


Aylan drowned along with his brother and mother on September 2 when the boat they were travelling from the Greek island of Kos to the Turkish town of Bodrum capsized.


The family fled after Islamic State militants advanced upon their home town of Kobane. Another cartoon said to be from the same edition of the magazine is entitled The Proof that Europe is Christian and features a man believed to be Jesus standing on the surface of the ocean while a child`s legs`s (presumably meant to be Aylan`s) protrude from the water. It says: "Christians walk on water? Muslim kids sink."


The cartoons have been met with a mixed response. Turkish newspaper The Daily Sabah claimed the images mock the drowned toddler. Morocco World News concurred, accusing the publication of "hiding behind the freedom of speech."


"Charlie Hebdo is a purely racist, xenophobic and ideologically bankrupt publication that represents the moral decay of France," Barrister Peter Herbert, who is Chair of the Society of Black Lawyers and former vice chair of the Metropolitan Police Authority, tweeted.


"The Society of Black Lawyers will consider reporting this as incitement to hate crime and persecution before the International Criminal Court." Complaints are being left on the magazine`s Facebook page and Twitter users have criticised the images, describing them as "tasteless" and "disgusting."


But some commenters have said the cartoons are not mocking the dead child and are instead using the tragedy to ridicule Europe for not doing enough to prevent it.
« Back to LIVE