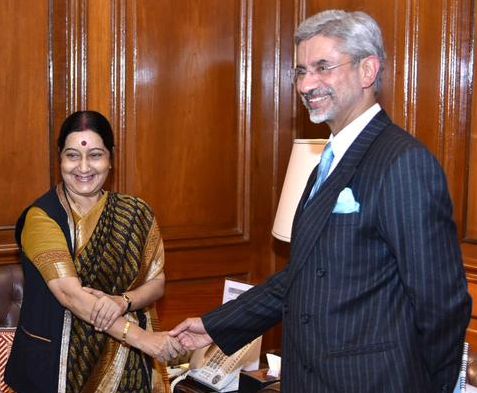 Did Sujatha Singh oppose some travel plans of Prime Minister Narendra Modi, especially to Fiji, which caused a rift between the Prime Minister's Office and the ministry of external affairs?

Or is it connected with her father, former IB chief TV Rajeshwar bringing pressure on the Manmohan Singh government to appoint her as foreign secretary?

Whatever be the reason, the Congress party has criticised the Modi government for replacing Singh, conveniently forgetting that Prime Minister Rajiv Gandhi had sacked A P Venkateswaran in a televised press conference.

To silence the main opposition party, however, some file notings to Dr Singh by his advisor may be 'leaked' to the media, say sources.

A Pakistani court has dismissed three identical petitions challenging the construction of the first Hindu temple in the country's capital.

The much-anticipated return of international cricket after almost four months was, almost predictably, delayed by rain on Wednesday as the start of England's first Test against the West Indies in Southampton was pushed back. It is 117...

Bajaj Finance was the top laggard in the Sensex pack, tumbling over 4 per cent, followed by Asian Paints, Bajaj Finserv, HCL Tech, Maruti and Infosys. On the other hand, IndusInd Bank, SBI, HUL, Tata Steel and ITC were among the gainers.