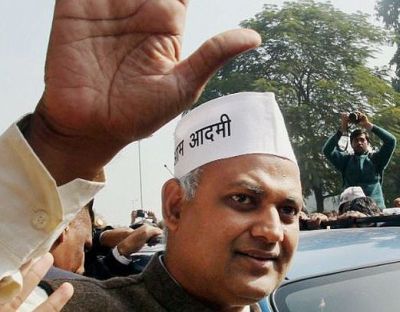 After being dropped out of the new Arvind Kejriwal-led cabinet, former AAP minister Somnath Bharti today said he had willingly decided not to take any responsibility because he wants to focus on building his constituency as a model one.
"Let me put all speculations to rest. I have willingly opted not to take any responsility in the government and not because I possess any demerit. I want to focus on building my constituency as a model one and utilise all my time and energy for the same," the Malviya Nagar MLA tweeted.
Responding to Bharti's tweet, Delhi's chief ministerial designate Arvind Kejriwal said he was proud of Bharti.
"@attorneybharti I am proud of u," Kejriwal tweeted.
Bharti, who was a former law minister, is one of four ministers to have faced the axe. He is also known to be extremely close to Kejriwal.
AAP sources said Bharti will be kept away from the cabinet till his name is cleared from the case relating to a midnight raid on the house of African women.
« Back to LIVE