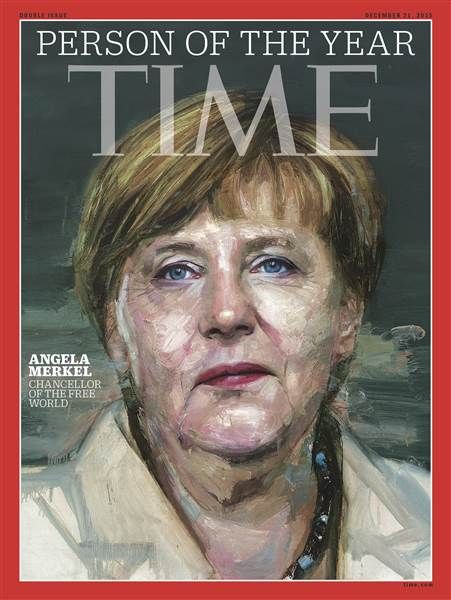 TIME Managing Editor Nancy Gibbs revealed that the woman who courted controversy in 2015 by opening her nation's border to hundreds of thousands of refugees and managed Europe's debt crisis as the choice in a TODAY show exclusive Wednesday morning.


The magazine bestowed the title on the 61-year-old world leader "for asking more of her country than most politicians would dare, for standing firm against tyranny as well as expedience and for providing steadfast moral leadership in a world where it is in short supply."


Merkel is the first individual woman to receive the "Person of the Year" recognition since TIME changed its title from "Man of the Year" in 1999. Women, however, have been recognized as part of a group, such as last year's winner, "Ebola Fighters."


Merkel was up against: Abu Bakr Al-Baghdadi, who as leader of ISIS has inspired followers to both fight in his self-declared caliphate of Iraq and Syria, and also stage attacks in countries like Tunisia and France.

Black Lives Matter activists, who have protested inequality towards African Americans, especially in their treatment by law enforcement.


Caitlyn Jenner, whose coming out as a transgender woman prompted widespread conversations about gender identity and issues of equality for the LGBT community.


Travis Kalanick, who as CEO of Uber drove his car-hailing company to a nearly $70 billion valuation, but also drew criticism about the downside of the sharing economy.


Vladimir Putin, who as president of Russia has defied Western sanctions over his country's military activity in Ukraine to play a critical but precarious role in the war on ISIS.


Hassan Rouhani, who as president of Iran is seeking to bring his country out of pariah status and repair its sanctions-crippled economy by pursuing a nuclear deal with the West.


Donald Trump, whose populist rhetoric has made him frontrunner in the race for the Republican presidential candidacy and stirred debate about the party's future.
« Back to LIVE