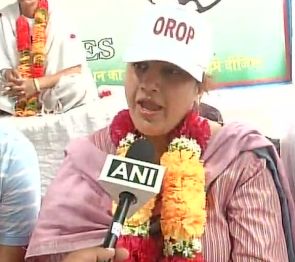 While the Narendra Modi government is facing a lot of flak from defence veterans for delaying the implementation of the One Rank One Pension scheme, it has been left red-faced now.
Union Minister and former Army Chief General VK Singh's daughter on Sunday joined the protest and urged her father for a speedy resolution. Mrinalini Singh said, "I have come to express my solidarity. I thought if veterans can sit on hunger strike then I should also come and sit with them. I come from an army family. Even my grandfather was a soldier and may be my son would also become one. I hope the government will soon heed to this demand. It's long over due and I did take up the issue with my father. He has written a letter to the PM."
« Back to LIVE