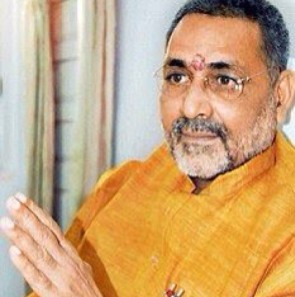 Known for his controversial comments, BJP leader and Union Minister Giriraj Singh on Sunday stoked a fresh controversy when he attacked Samajwadi Party supremo Mulayam Singh Yadav over the latter's gangrape' remark.
Addressing a gathering at his Lok Sabha constituency Nawada, Giriraj slammed Mulayam Singh, stating, "He believes gangrape is not possible. Since he is an elderly person we can't even ask him whether he has any experience of rape?"
Mulayam Singh had a few days back stirred hornet's nest by making a remark on the issue of rape incidents taking place in the country, saying that while one person commits rape, four are named in the complaint even though rape by four persons is not 'practically' possible.
« Back to LIVE