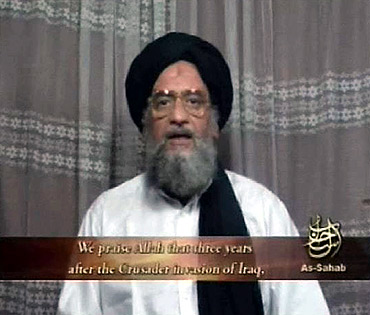 Just in: The Home Ministry has asked the IB to verify the authenticity of an Al Qaeda video that threatens to take the terror outfit's campaign to India.

The Intelligence Bureau has issued a security alert to several states after al Qaeda leader Ayman al Zawahri announced the formation of an Indian branch of his militant group, a report said on Thursday.

The Ministry of Home Affairs, meanwhile, sought a report on a video which features Zawahri announcing the formation of the branch which he said would spread Islamic rule and "raise the flag of jihad" across the subcontinent.

Intelligence agencies will analyse the video of Zawahri to check its veracity.