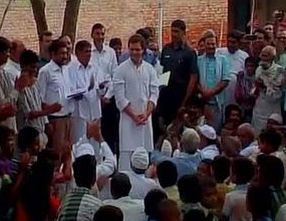 Congress vice president Rahul Gandhi, who was in his constituency, Amethi today, hit out at the Narendra Modi government saying it has been unable to fulfill its promises and check price rise. Hitting out at Modi's just concluded Japan visit, Rahul said, "The PM is playing drums in Japan, while prices are going up."

The BJP lost no time in hitting out at Rahul saying the Congress is responsible for inflation and unemployment and that Rahul should be ashamed of his own party and leaders.

UPA gave the problem of inflation
« Back to LIVE