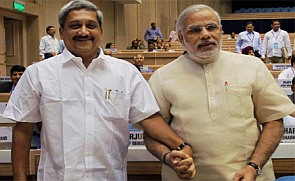 Prime Minister Narendra Modi will soon reshuffle his Cabinet. The move has been necessitated due to many reasons, mainly the overburdening of some ministers.

The key portfolios of defence and finance are handled by Arun Jaitley, which is considered an impossible task. CNN IBN reports that the PM is keen to move Goa CM Manohar Parrikar to Delhi to be the defence minister.

Modi is looking for more energy quotient in his ministry. The image has been gaining ground that Modi is struggling to bring in change without the backing of a strong council of ministers.

Except for Jaitley, Sushma Swaraj (external affairs) and Rajnath Singh (home), there are no political heavyweights in Modi's Cabinet.