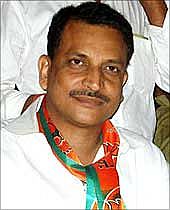 BJP MP from Chhapra, Rajiv Pratap Rudy has been sent to a punishment posting to Tamil Nadu and Andhra Pradesh.

Here's the inside story. Rudy was the party's central observer during the Maharashtra elections, but his failure to get a majority for the party has been frowned upon by the powers that be.

So, Rudy has got marching orders out of Maharashtra and was told to head to Tamil Nadu and Andhra Pradesh.

This is also believed to be a reminder from the party that they will not forget that Rudy was in the Advani camp and therefore needed to be cut to size.

After the Bihar elections in mid of 2015, Rudy will have to strive hard to keep his position in the BJP.
« Back to LIVE