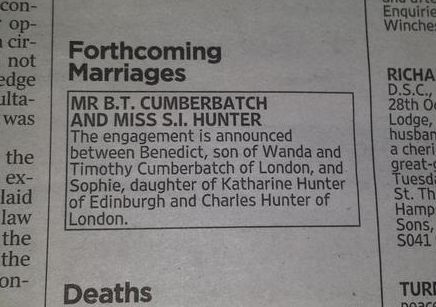 MR B.T. Cumberbatch And Miss S.I Hunter
The engagement is announced between Benedict, son of Wanda and Timothy Cumberbatch of London, and Sophie, daughter of Katharine Hunter of Edinburgh and Charles Hunter of London.

That's the advertisement in the Times, London, that's got fans goggle-eyed and happy -- Benedict Cumberbatch appears to have announced his engagement to rumoured girlfriend Sophie Hunter. The two have been quietly dating for months, and the couple have made just a handful of public outings together.
« Back to LIVE