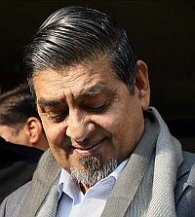 Here are the other names in Rahul Gandhi's panel for the Delhi polls. DPCC chief Arvinder Singh Lovely, Ajay Maken, Shakeel Ahmed and Haroon Yusuf. Expect a huge, huge backlash from both the BJP and the AAP for the decision to have 1984 riots tainted leaders Sajjan Kumar and Jagdish Tytler in the panel as well. What was he thinking?

Meanwhile, Senior Congress leader Haroon Yusuf said, "The BJP has to answer why the elections in Delhi were repeatedly re-scheduled in last five months."

The Congress party has also not named its chief ministerial candidate. The AAP has tried to pitch it as a direct fight between Arvind Kejriwal and senior BJP leader Jagdish Mukhi but the latter refused to bite the bullet.
« Back to LIVE