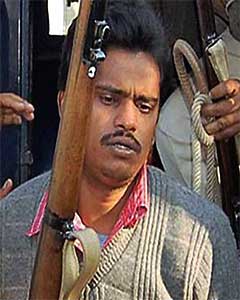 In other news: The government today recommended the rejection of five mercy petitions including that of Surendra Koli sent to the gallows for the infamous serial killing of children in Nithari in Noida and of two sisters sentenced to death for murdering several children.

The death sentence of 42-year-old Surendra Koli, who brutally killed and later axed children in Nithari locality of Noida in UP, was confirmed by the Supreme Court in February 2011.
« Back to LIVE