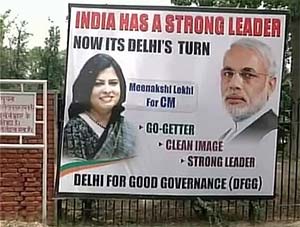 A banner in Delhi in support of BJP spokesperson Meenakshi Lekhi as the next CM. Delhi is being governed by Lt governor Najeeb Jung after the AAP government stepped down in February this year after 49 days of rule.

Supporters of the BJP MLA from Janakpuri, Jagdish Mukhi, have started a Facebook page called Jagdish Mukhi for CM. A storm is brewing in the BJP with many Delhi leaders allegedly threatening to "not cooperate" and even "lose deliberately" if former top cop Kiran Bedi was named the party's next chief ministerial nominee. Bedi had said she was ready to be Delhi CM.
« Back to LIVE

In a statement, the DGCA said it will be conducting "random checks" in aircraft across the country to see if the COVID-19 protocol is being enforced or not.

All the convicts belonged to outlawed Jama'atul Mujahideen Bangladesh.

The Congress on Wednesday said senior party leader Ghulam Nabi Azad was consulted several times before finalising the names in the revamped Jammu and Kashmir unit of the party, rejecting reports that the former Union minister was not on...

The agency detected the fixed deposits in State Bank of India, Axis Bank and Bank of India during the questioning of several close aides of Mondal and other witnesses during its ongoing probe in the case, they said.

Ronaldo, who rejoined United a year ago from Juventus, has a year left on his contract.