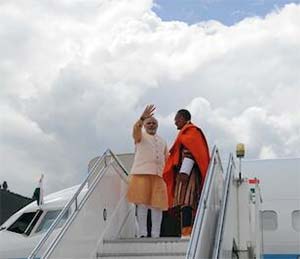 And PM Narendra Modi bids farewell to Bhutan, his first visit abroad after he assumed office. India on Monday proposed new ideas for further enhancing cooperation with Bhutan while asserting that commitments made by the previous government will be fulfilled.

Prime Minister Modi proposed to hold a joint sports festival between Bhutan and northeastern states of India, establish e-libraries in 20 districts in Bhutan and set up a university on Himalayan studies, she said.