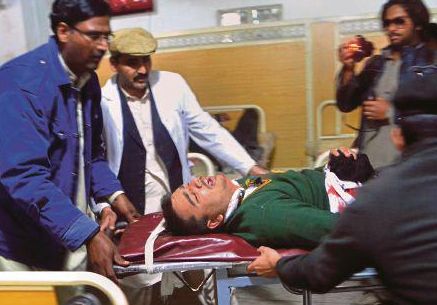 A teenage survivor of Tuesday's Taliban attack on Army Public School in Peshawar, described how he played dead after being shot in both legs by insurgents hunting down students to kill.

The Dawn reports how militants rampaged through the army-run school in Khyber Pakhtunkhwa's capital and killed at least 130 people, most of them children, in one of the bloodiest attacks in Pakistan.

Speaking from his bed in the trauma ward of the city's Lady Reading Hospital, Salman, 16, said he and his classmates were in a careers-guidance session in the school auditorium when four gunmen wearing paramilitary uniforms burst in.

"Someone screamed at us to get down and hide below the desks,' he said, adding that the gunmen shouted 'Allahu akbar' (God is greatest) before opening fire.

"Then one of them shouted: 'There are so many children beneath the benches, go and get them'," Salman told AFP.

"I saw a pair of big black boots coming towards me, this guy was probably hunting for students hiding beneath the benches."

Salman said he felt searing pain as he was shot in both his legs just below the knee.

He decided to play dead, adding: "I folded my tie and pushed it into my mouth so that I wouldn't scream. The man with big boots kept on looking for students and pumping bullets into their bodies. I lay as still as I could and closed my eyes, waiting to get shot again," he said.

"My body was shivering. I saw death so close and I will never forget the black boots approaching me. I felt as though it was death that was approaching me," Salman added.


Pic: An injured student is wheeled into hospital. Over a 100 were injured in the massacre that began at 11 am today.
« Back to LIVE

Singh noted that opposition members tore rule book, threw papers at the desk of the Rajya Sabha Deputy Chairman Harivansh, who was in the Chair, and climbed the officials' table -- something, he added, he had never witnessed before.