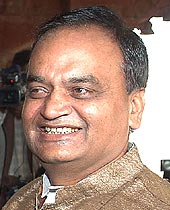 More than 30 years ago, I was in a bus in New Delhi riding from the Jawaharlal Nehru University to Sapru House. I was sitting next to my JNU friend Digvijay Singh -- a tall, big built man who we affectionately called Dada. During the long ride, in the tortuous heat of Delhi, I asked Dada to read my hand.

I do not remember why I asked him to do so. Perhaps I had heard that he knew palmistry. But I remember this part of the story like it happened yesterday.Dada held my right hand and told me two things: that I will have a long life; and that my parents will be there with me for a long time.

Last week, I woke up to read on twitter that Dada had passed away in London.Earlier I had learnt from another JNU friend Chandrashekhar Tibrewal that Dada was in coma, having suffered a brain hemorrhage while on an official visit to London.

I now wonder whether Dada had ever read his own hand. He was one year older than me. He died at the young age of 54.  Could he foretell that his life was going to be relatively short?

I met Dada in JNU in the late 1970s. We were from two very different worlds. I was born and educated in Delhi and somewhat politically naïve, but engaged in the capital city's strange blend of western liberal and yet conservative North Indian culture.

Dada came from Bihar, steeped in state's caste-based politics -- something I had very little understanding about. We connected on JNU's political stage, but there was also a personal contact. He was a warm smiling man with a very compassionate voice and a wicked sense of humour. I later realised that he was also a shrewd politician who would take his experiences in JNU to launch his national political career.

The university campus was a hotbed of student politics -- a reflection of the mood of the country.Indian politics was in turmoil. Indira Gandhi had lifted the Emergency in 1977 after two years of authoritarian rule, when fundamental rights and freedom of press were set aside, opposition party leaders were put behind bars and the country was ostensibly run by the prime minister's younger son Sanjay and his goons. (Sanjay died in an air crash in 1980 and oddly enough, I remember sharing the news with Dada, again in a bus in Delhi).

JNU's student politics somewhat resembled the national political scene -- with youth wings of the two Communist parties, and some shades of the Janata Party coalition. Dada belonged to a group first called Yuva Janata and later it evolved into Students for Democratic Socialism that owed its lineage to Ram Manohar Lohia and Jaiprakash Narayan. As it was customary for most JNU students to be part of one group or another, I had joined the independent Free Thinkers -- the only student group that did not have any official connection with a national political party. For a few years, the Free Thinkers or FTs as we referred to ourselves, formed a political alliance with SDS in the students' union elections, using our combined strength to counter the SFI-AISF coalition (youth wings of CPI-M and CPI).

In 1979, I was elected to the student union as a councillor from the School of International Studies. Dada was elected as the general secretary of the union. The year we spent in the union was packed with what seems like inane issues now: hunger strikes to support struggles of individual students; discussions on whether we would back the agitation in Assam against illegal Bangladeshi migrants; or protest against bus fare hikes in Delhi. There were long late night sessions arguing and voting on resolutions. We took our politics very seriously, so certain that we were about to change the world around us.And because of our political coalition, Dada, his group and the FTs always strategised and then voted together.

A year later, we both contested again. He was the candidate for the president's post while I contested as the vice president of the students' union. The political climate of JNU had changed and this time we both lost.

I left India in 1981, but followed Dada's political career in later years and his rise through system. I heard from other JNU friends who sometimes approached him for favours and he would use his political stature to get the jobs done. I later also heard some unsubstantiated rumours that he had made money during his years as a politician and as a minister in the governments of prime minister Chandrashekhar and Atal Bihari Vajpayee. But I did not see him all those years.

Then a few years ago, when he was the minister of state for foreign affairs, he was invited as a guest at India Abroad's Person of the Year event in New York City. After the programme as guests mingled, I walked up to Dada and asked him if he recognised me. His face lit up, just as I always remembered. "Arrey of course, Aseem," he said, grabbing my hand, as if we were long lost friends. And commenting on the weight I had gained in the 20-plus years since we had last met, he added laughing, "Tum bahut chaurdey ho gaye ho (You have become quite wide)."

He then suggested that I should come visit him in his hotel room. I went to his room later that night, with another JNU friend Arshiya Sethi. That night Dada asked me why I continued to stay in the US. I explained to him that I had a child in school, and then there was my writing career.

"You should come back to India," he said."More people will read your writings. And right now I am in the government so I can easily get you placed at one of the newspapers in Delhi."

Arshiya stepped in to say that it was important for me stay in New York to be with my son. "Arrey the child lives with his mother," Dada responded. I had told him that I was separated from my son's mother. "The mother can bring him up, and you can see him during his vacations."

Soon after, we ended that conversation. Later heading home, I thought about the fact that Dada and I had come from two very different Indias. I had the opportunity to sense the other India through him, but now our worlds were even further apart.

His death came as a shock. I miss the man who once told me that I will live a long life. And I can hear his voice in my head.