Jharkhand: The fire in the earth's belly 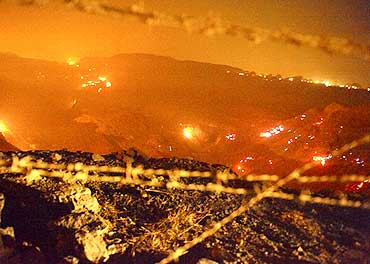 The haunting inscription that marks the gates of hell in Dante's Inferno could well be true for Jharkhand. For, the underground fires that have been raging in the coalfields of this state over several years are now beginning to engulf its thickly inhabited areas as well.

An underground mine fire that has been raging for nearly six months now poses a threat to railway tracks after it led to the closure of the Ranchi-Patna National Highway last year.
The mine fire spotted at four to five places near the Kalyani project of Central Coalfield Limited at Bermo in Bokaro district has posed a threat to both the Bermo-Chandrapura-Dhanbad highway and the Gomoh-Barkakhana railway route. The railway track is around 40 feet away from the fire and the highway is around 10 feet away. The fire is spread out in a two-kilometre area.

Earlier, the National Highway-33, which connects Ranchi and Patna via Hazaribagh and Koderma, was closed August 7, 2009 because of the underground mine fire that touched the road.

Meanwhile, another underground mine fire now poses a threat to railway tracks at Basjora, a railway halt in Dhanbad district. It falls between Dhanbad and Katras railway route used daily by the Rajdhani and Shatabdi Express trains.

The fire broke out at quarry No. 15 of Godhar coal mine in 2008 and spread fast almost two kilometers from the Godhar railway station near Dhanbad town forcing 400 families to be evacuated from near the open-cast mine belonging to Bharat Coking Coal Limited.

Residents said they saw flames as high as 15 feet, forcing them to flee onto the highway where traffic had to be stalled for nearly an hour.

Panic gripped Sudamdih new mines area under eastern Jharia on December 28, 2007 when large cracks developed on the road and buildings spread over an area of nearly half km due to the land subsidence. While major cracks developed in almost all the rooms of Birsa Memorial High School, minor cracks were seen on walls of many houses of mini slum area situated by the side.

According to eyewitness, the residents of the locality heard some gurgling sound from beneath the earth at around 9.30 in the morning and cracks started developing on the surface. Fearing major land subsidence, residents came out of their houses and started running helter-skelter.

In October 2007, the area had experienced gas leakage from beneath the earth after which the coal organisation management dug many holes to control the underground fire by stowing water mixed with sand through the holes. It is all due to underground mine fire which is now slowly engulfing the area.

Such is the intensity of the fires that even a mid-summer sun pales in the smoky haze that they generate. After dusk, the flames take on morbid hues. "Jharia resembles a cremation ground at night".

Few years ago the town's temple snapped into two. The next moment, flames leapt out from underneath spewing noxious gases. The people of Jharia then realised that the underground fire had finally reached their doorstep.

Some 150,000 miners, truck drivers, loaders and other workers brave this hazard to eke out a living. The fires have consumed about 42 million tonnes of India's best coking coal.

There appears to be no permanent solution in sight. The only opinion seems to be cut out trenches to disconnect fire seams which have been identified. But this would require a huge investment. But the extent to which has flared up in Jharia makes dousing it an uphill task-particularly when all the prevailing conditions further fan the fire.

The only solution which is now seen is the shifting of the town. This means that the relocation would affect the nearly 3 lakh population of Jharia, approximately 1 lakh houses and other buildings and a prospering economy.

About the Jharia coalfield
India has a long history of commercial coal mining covering nearly 220 years starting from 1774 by M/s Sumner and Heatly of East India Company in the Raniganj Coalfield along the western bank of the river Damodar. The Jharia coal field is the largest coal producer in India consisting of 23 large underground and nine large open cast mines. The mining activities in these coalfields started in 1894 and had really intensified in 1925. The history of coalmine fire in Jharia coalfield can be traced back to 1916 when the first fire was detected. At present, more than 70 mine fires are reported from this region. The Jharia coalfield which is the only coking coal source of India is located in the district of Dhanbad (Jharkhand). The southern edge of this coalfield is marked by the perennial river Damodar. Coal mining in this region was started as early as in 1890 providing a long span of hundred years of exploitation.

Fires in Jharia coalfield have been originated basically from spontaneous combustion occurring either underground or along the outcrops, and are restricted in Barakar formations with shallow depth of less than 40 metres, mainly top seams, which are thick and therefore more prone to spontaneous heating fires. There are about 20 fire spots covering an area of 17.35 square kilometers. Jharia coalfield, which is a famous coalfield of Dhanbad, stretches from west to east in the shape of sickle.

The landscape of the area is characterised by undulating rocky and gritty surface with thin veneer of in situ-soil supporting thin and sporadic vegetation. Seasonal crop is grown over valley filled alluvium/colluviums soil. Mining quarries, mine waste dump, subsidence of land surface, settlement for mining activities etc. are very common in the region.

Coal fires are a natural occurrence and as widespread as forest fires. Besides the blaze in India's Jharkhand state, the coal fire of Indonesia is regarded as the wildest on the earth.

Lightning, forest fires or frictional heat generated during churning inside the earth's crust can also ignite coal fires. Regarding Jharkhand research says that no single reason can be attributed to the fire. Jharkhand coal is not very prone to auto-oxidation.

It is not only the Jharia or its adjoining areas which are affected but areas like north Karanpura coalfield, East Parej coalfield are also under the grip of coal mine fire. Now more and more areas are coming under threat resulting in landslides, toxic gas emissions, rise in surface temperature, depleting of groundwater etc.

Effect of coal fire on the surroundings
The pollution caused by these fires affects air, water, and land. Smoke, from these fires contains poisonous gases such as oxides and dioxides of carbon, nitrogen and sulphur, which along with particulate matter are the causes of several lung and skin diseases. High levels of suspended particulate matter increase respiratory diseases such as chronic bronchitis and asthma, while the gases contribute to global warming besides causing health hazards to the exposed population. Methane emission from coal mining depends on the mining methods, depth of coal mining, coal quality and entrapped gas content in the coal seams. These fires also pollute water by contaminating it and increasing its acidity, which is due to a certain percentage of sulphur that is present in coal. These fires lead to degradation of land and do not allow any vegetation to grow in the area.  Satellite picture beside shows a haze over Jharia and Dhanbad due to mine fire causing atmospheric pollution.

How to minimise fire:

Fire-fighting techniques include drilling holes and pumping inert gases or foam that stifle the flames, burying the fire to deprive it of oxygen, building walls to isolate burning sections, saturating coal with liquid nitrogen, and dousing coal with water or water and soil slurries. Slurry water usually with sand, fly ash, mud is used for decreasing voids and cracks in the fire area. Water solid ratio 10:1 works well. A mixture of cement and milk of lime or CaCl2 or sodium silicate with water under pressure are becoming popular. Flooding the mine with water is the last resort in fighting fire. It is slow and very costly to repair damage it causes. When all direct methods fail, the fire area is to be sealed off. Stopping should be as close to the fire as possible and they should be leak proof. Where methane evolves the seals should not be too close to fire but 100-300 meters away so an explosive mixture is not formed.

Dr Nitish Priyadarshi is lecturer in the department of environment and water management, Ranchi University.

JeM threatens to blow up trains in Jharkhand