Build on the new foundations of Kashmir's new mood

By Sanjaya Baru
June 07, 2010 15:26 IST
More than half of the solution to the Kashmir problem is within Kashmir itself. This thought must guide Prime Minister Manmohan Singh as he visits Srinagar this week for the fifth time in six years, says Sanjaya Baru. 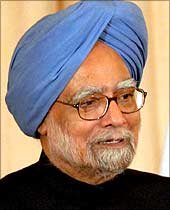 The recent opinion poll, conducted by Chatham House on either side of the Line of Control in Jammu and Kashmir and widely reported in the media, showed that only 2 per cent of the people of J&K want to be part of Pakistan. As many as 58 per cent of the 3,774 polled, in J&K and Pakistan-occupied Kashmir, are ready to accept the LoC as a permanent 'soft border' -- an idea dating back to the famous 'Simla Agreement' of 1972 between Indira Gandhi and Zulfiqar Ali Bhutto. These poll results offer a resounding endorsement of the approach adopted since 2003 by the Indian and Pakistan governments.

It was in the spring of 2003, on the 20th of April, that a new 'peace process' was initiated in Kashmir by former prime minister Atal Behari Vajpayee. Speaking in the name of insaniyat (humanity), Mr Vajpayee was bold to add, "We want friendship with our neighbour. But both sides have to act positively."

Prime Minister Manmohan Singh picked up these threads and began, on the one hand, a marathon discussion with President Musharraf, both one-on-one and through the famous 'back channel', and on the other, initiated a dialogue with a cross-section of opinion within Jammu and Kashmir through several rounds of the famous 'J&K Roundtable'.

Both exercises have helped bridge the gap between various actors in the Kashmir saga. President Musharraf has written and spoken about his version of the understanding that he and Dr Singh had arrived at by 2006. Summarising them, A G Noorani has written, "The four main points on which an India-Pakistan consensus exists are self-governance or self-rule for both parts of the state; the opening of the LoC so that it becomes, as the prime minister said on March 24, 2006, 'just lines on a map'; a joint management mechanism for both parts; and demilitarisation." India may prefer the term 'cooperative' to 'joint'.

In a famous speech delivered on March 24, 2006 at Amritsar, Prime Minister Singh said, and it is worth quoting in extenso: "The journey of peace must be based on a step-by-step approach, but the road must be travelled. As an ancient saying goes, a road is made by walking. A step-by-step approach has to be adopted given the inherent difficulties involved in finding practical solutions. I suggest that both sides should begin a dialogue with the people in their areas of control to improve the quality of governance so as to give the people on both sides a greater chance of leading a life of dignity and self-respect.

"I also envisage a situation where the two parts of Jammu and Kashmir can, with the active encouragement of the governments of India and Pakistan, work out cooperative, consultative mechanisms so as to maximise the gains of cooperation in solving problems of social and economic development of the region."

Dr Singh went on to add, "We must move forward. We want to move forward. We need to do much more to create the environment in which we can move forward. It is possible for us to come to a meaningful agreement on issues like Siachen, Sir Creek, Baglihar. I am convinced we can move forward, if all concerned are willing to accept the ground realities; if all concerned take a long view of history and of our destiny. The time has come to leave behind the animosities and the misgivings of the past and to think the unthinkable of moving together in pursuit of our common objective of getting rid of chronic poverty, ignorance and disease that still afflict millions of our citizens."

Events in Pakistan, President Musharraf's own domestic political travails, and perfidious acts of terrorism in India staged by elements from across the border have prevented any further progress. Four years have passed and the bilateral dialogue is back on track. But the immediate next steps in this 'walk' where the 'road is made by walking' have to be taken at home in Kashmir.

Dr Singh is in Srinagar again today and will seek to resume his dialogue with the people of the state. Unfortunate incidents have happened recently and the prime minister must demonstrate his commitment to 'zero tolerance' of human rights violations as well as zero tolerance of violence and terror. Going beyond these incidents, it is time to build on the new foundations of the new mood in the state.

India's national leadership, across political parties, must rise to the occasion and take the cue from the vision outlined both by Mr Vajpayee and Dr Singh. The three key concepts on which the Indian approach to the resolution of the problem of Kashmir should be based are insaniyat (humanism), jumhuriyat (democracy) and Kashmiriyat (the shared culture of the people of the region, irrespective of religion).

It may take some time for Pakistan to be ready to take the next step from where President Musharraf left the dialogue with India, but that should not deter forward movement in our internal dialogue with all sections of opinion within J&K. There is an agenda of governance, development and modernisation that has to be taken forward, so as to create a domestic political environment conducive to a movement forward on the lines envisaged by President Musharraf and Prime Minister Singh.