News
Business
Movies
Sports
Cricket
Get Ahead
Money Tips
Shopping
Sign in  |  Create a Rediffmail account
Rediff.com  » News » China's real competition is within, and not outside

China's real competition is within, and not outside 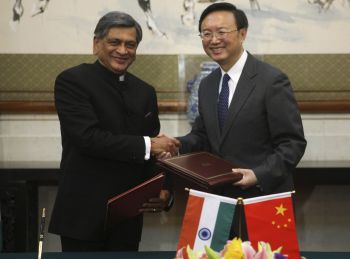 China is facing a competition, not with India, but between two ideologies within its own country.

India and China marked the 60th anniversary of India's recognition of the People's Republic of China with a visit to Beijing by the Minister for External Affairs S M Krishna earlier last week. India was the first non-socialist country to recognise the People's Republic.

In his speech at the China Institute of International Studies, Krishna said, "As rising powers, India and China are often projected to have a competitive relationship. In the final analysis, we all are what we want to be. It is up to us to disprove such scenarios, not through platitudes and wishful thinking, but by concrete examples of cooperation... But there is more to our prospects than issue-based cooperation. Our rise promises to alter the configurations of the global order, as we have known it in a fundamental manner. We cannot accept incremental change in the way the world is currently run. The G-20 represents the first step in a new direction. Our combined efforts can help reform the systems of international financial governance much more effectively than we could by working alone. We have yet to find the right common denominators in many areas. If India and China work purposefully in this direction, the whole world stands to benefit."

A few months ago, there was a sense of rising tension in the media of both countries. Thanks to the efforts of the two governments, the media-generated sense of confrontation has been reversed.

There is, at present, a realistic appreciation in both countries that the issues between them are not worth generating the risk of a conflict in the age of nuclear weapons and globalisation involving extensive energy imports subject to vulnerabilities in transit across oceans.

Still, there are various issues such as support to Pakistani nuclear effort, stapled visas for Kashmiris and non-tariff barriers in respect of access for Indian goods to the Chinese markets, which need to be addressed. However, given the goodwill on both sides, they are solvable problems.

In the light of this goodwill, Krishna very rightly focused on the fundamental issue arising from the rise of the two powers -- which constitute 40 percent of humanity -- that it promises to alter the configuration of the global order, as we have known it in a fundamental manner.

He has argued for purposeful cooperation between India and China that would benefit the whole world.

Not very long ago, it was fashionable to talk of a G-2 management of global financial system, both in China and the US. Though there is less talk about it now, China has so far not displayed much interest in discussing economic poly-centrism in the BRIC (Brazil, Russia, India, China) bloc or Sino-Russian-Indian meetings.

China's economic focus has been on the US, EU, East Asia and Arab countries. It is to be seen whether Krishna's suggestion evokes any positive response.

There have been some recent discussions among Chinese academic circles about the likely shift in balance of power that could occur among the three major powers -- the US, China and India -- in the future.

The conclusion was that the two less powerful nations would come closer to each other to balance the most powerful one. But this balance of power is envisaged in conventional and static terms

In the 21st Century, China, the second-ranking economic, technological and military power, will be attempting to close the gap between itself and the foremost power, US.

On the other hand, the US having been the foremost power of the world since 1945 would be striving to sustain its primacy.

If all the three powers are totally non-ideological, it is logical to expect the two lesser powers to make common cause against the foremost one. But this is not the 19th century of Metternich.

Here Krishna's observation that in the final analysis that "we are what we want to be" becomes extremely relevant.

In the 21st Century, there are international values and norms, which were not there in the early "balance of power" days.

In today's world, the US, EU, Japan, Russia and India have adopted democracy based on individual human rights as the norm for their domestic political order and for their international relations.

China is the only major power that has chosen to stress the primacy of the state and harmonious nation over the individual human rights. Consequently, its international relations are also influenced by its preferred choice of value system.

Choices of partners for cooperation and balance of power in 21st Century will not be wholly free of the influence of this value system factor.

So long as China wants to be the unique nation, which does not choose to be democratic, it will stand alone in a globalised world.

That, in turn, leads to the question of competition and cooperation. A globalised economy involves economic and technological competition among nations. That is the very essence of the market economy and keeps it continuously advancing through fresh technological innovations.

Krishna could not have had this competition in mind when he talked of relationship between India and China. Obviously his reference was to ideological competition. India is not the competing party since it has adopted a value system prevalent over many major countries of the world -- democracy.

The real competition is within China -- with its unique value system of giving the state primacy over the individual, of giving preference to harmony among the population over the right of dissent and pluralism, and maintaining a self-selected ruling elite to guide the nation instead of a democratically-elected government with inherent legitimacy that is competing with the rest of the world to prove to its own people that its system is more beneficial.

While it speaks on the success of the Chinese system, it also poses a challenge to it in terms of its legitimacy and future stability.

There are now permitted voices in China pleading for a gradual advance towards democracy and pluralism.

The upcoming competition is between two ideologies within China.

US must mediate between India, Pak: Gilani

Krishna to take up India's 'concerns' with China