While celebrating our democracy and its biggest rituals we also need to think about the kind of society we are building.

When Jacob Zuma was elected President of South Africa last month, leading lights of the Western press were overwhelmed. Not by the veteran African National Congress leader's clever politics, his extraordinary negotiating skills or his undeniable popularity with the poor Whites of the racially divided nation but by his Zulu customs! Zuma is an unapologetic Zulu traditionalist and his polygamy and his occasional partiality for leopard pelt had reporters for Western media organisations riveted. Along with detailed speculation on which of his two wives apart from a fiancée would occupy the Cape-Dutch style presidential palace in Pretoria as first lady, theWall Street Journal and The Washington Post, among others, were giving readers colourful reports of the exuberant Mr Zuma's personal life, complete with pictures of the Zulu leader dancing at his wedding in traditional costume.

Call it the Zuma wives fixation. It is an egregious example of the media's ability to ignore serious issues in its obsession with trivial but clearly saleable stories that distort the reality. But why blame the western media alone? It's true of our media, too, which has its idea fixes, its entrenched biases and likes to black out the less pretty picture. It's so much nicer to reinforce a sense of national wellbeingreal or imaginedthan to highlight unpleasant issues that show up the dark heart of the nation.

Two ideas of what India's celebrated democracy (neighbour's envy, region's pride) represents were in conflict during the elections. The predominant one, self-congratulatory, was reflected in the saturation coverage of the new political icons, the razzmatazz of the election machinery. The other was the virtual blackout of the Binayak Sen tragedy. Just two days before the results of the 15th Lok Sabha elections were announced, human rights activists, the global fraternity of physicians and Nobel laureates were marking a grim anniversary: the second year of the incarceration of the Healer of Chhattisgarh who stands accused of waging war against the state.

This is not a gripe about coverage of the event itself. Since celebrities were involved (high-profile authors and hundreds of Nobel Prize winners) in the campaign and there was drama (doctors in Edinburgh chained themselves to railings), the anniversary did get a sound byte or a paragraph or two. What is missing in this calamity is an attempt to understand why the Binayak Sen case will haunt us. It is not simply a question of whether the accused doctor acted as a courier (or not) for a jailed Maoist. In the starkest terms, the case highlights the failure of the state to abide by the democratic norms it claims to uphold (fundamental rights, directive principles et al) in looking after its citizens.

In another sense, it is the failure of the media, the bureaucracy and the political establishment to arrive at a proper understanding of what reforms mean for the country. For too long the debate has been hijacked to mean just one set of reforms, financial liberalisation, while ignoring the vast range of developmental reforms that are needed to pull out huge swathes of this country from their feudal, exploitative and abysmally backward bogs.

The Binayak Sen case is primarily about the rotten state of affairs in the rural hinterland. It's about higher poverty levels; shortage of food and lack of nutritional planning for the chronically undernourished; it's about missing healthcare; lack of protection for the vulnerable; it's about rampant exploitation of the forest dweller and tribal peoples. The districts where Maoists or Naxalites are active, and it's true of not just Chhattisgarh, as we all know have the worst social infrastructure, and thus offer the best breeding ground for extremism and violent conflict.

The case is also about one vision of development colliding with another that is backed by the might of the state. Bastar and adjoining districts of Chhattisgarh are home to the highest concentration of mineral rich deposits in the country and is one of the reasons why these areas have become high-intensity conflict zones. Is resistance to land acquisition by industrialists a major contributory factor to the violence in the state? Few are aware of the extent of the problem in Chhattisgarh. Thousands of tribal people have been uprooted from their forest habitations -- close to 650 villages in the forest areas are reported to have been cleared in an operation reminiscent of the ways wars were fought in Southeast Asia -- and have been housed for the past five years in refugee camps that are run by trigger-happy and lawless elements who are supposed to be fighting the Maoists.

If this is how democratic states function surely we need a reform of India's democracy? But these and related issues are seldom raised in the general clamour for reforms that have picked up in crescendo post the election verdict. One and all, media pundits who have been setting the reform agenda for the new government are screaming for reforms that are focused exclusively -- and predictably -- on financial sector liberalisation.

True, there is the burgeoning fiscal deficit and a slew of regulations that were put on hold because of ideological conflicts in the United Progressive Alliance that need to be dusted off. There is the Pension Fund Regulatory and Development Bill, amendments to raise the cap on foreign investment in insurance, amendments to the Forward Contracts Act. But surely these cannot form the sum and substance of reforms in the country? How about priority for reforms that would make elementary education free and compulsory (that bill has been pending for more than five years), reforms that would make clean drinking water a non-negotiable fundamental right just as healthcare for the neediest? Perhaps, the media believes such matters concern only pockets of the largely invisible poor and have no bearing on the country's democratic future.

Inclusive growth can make for tedious debate whereas financial liberalisation can pull in the global power brokers. Besides, you can always blame the Left for having stalled such reforms. But in some quarters at least, there is less of an obsession with financial liberalisation probably because experience has made them wiser. The Congress for one knows that the wide-ranging liberalisation introduced by Manmohan Singh in the 1990s was largely responsible for keeping it out of power for close to a decade; its less aggressive and more 'inclusive' policies of 2004-09, on the other hand, have swept it back to power.

That's why an exasperated Kamal Nath was forced to tell a TV channel that financial liberalisation could very well wait. Those advocating such reforms were in a mess themselves. In rich countries, governments are being forced to give money to the banks whereas in India banks are giving money to the government, he pointed out tartly.

Will the pundits realise it's time to refocus the reforms debate or will the Zuma wives fixation continue? 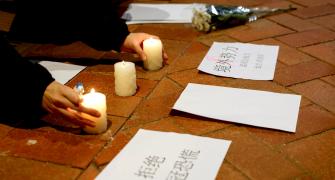 Why Dr Binayak Sen must be released