The one thing Chidambaram is terrified of 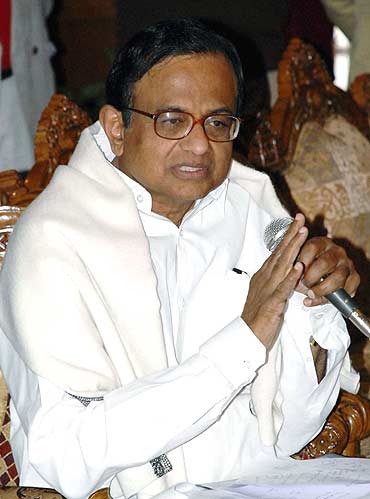 P Chidambaram watches my waddling progress from the gate of 19, Safdarjung Road in Delhi to his sitting room and asks how I had come. "On my scooter," I say, panting ever so slightly. "It's parked at the gate," I add. "Must be a hardy scooter," he observes. "If you're going to be rude..." I begin. His eyes dance with mirth and his shoulders shake with laughter. It is a propitious beginning to our lunch at The Deck at the India Habitat Centre (IHC), writes Aditi Phadnis.

"A lot of young people are here," he says when we reach IHC, adding, "This place must be inexpensive". When I tell him it isn't, he returns, "Young people today have a lot more money than we did. When I was in school, I used to get Re 1 a week as pocket money. My corpus increased after I won a couple of elocution competitions. The prize used to be Rs 75 and I used to tell my mother I was going to keep that ...".

We make our way to The Deck. Although Chidambaram is a life member, he has never been here to eat, and can't remember his membership number. Once that's sorted out, we order food -- crab salad and grilled fish for him, olive and sun-dried tomato salad and chargrilled vegetables for me.

"Let's talk about all the times you've been minister," I venture. "More times than I should have been," he replies. Beginning 1985, "when I was minister for everything..." he starts.

"Yes, when you made Saturday a holiday for government offices. That was a really, really bad decision," I say. "I don't agree. But because of Rajiv Gandhi, that was not the only thing we did," he says. "I rewrote rules for the civil services, training for bureaucrats... Of course, it all fell by the wayside when the P V Narasimha Rao government came to power," he adds.

Does he see any effects of all those changes today? "Well, those who were deputy secretaries then got used to working on a computer. I still remember the huge computer and modem that I acquired during that period. Now, all the files, all the storage are on my laptop. I give dictation on the computer. Of course, files have to be maintained. But just look at all the paper we've saved because people got training then."

In 1991, he became the commerce minister. In a single sitting on July 7, he reduced the trade policy to 198 pages. He would have refined it further but he stepped down, only to return to the same job in 1995. "Why did Narasimha Rao do that -- reappoint you in the same job?" I ask curiously.

"The Rao government was in a shambles. Arjun Singh had been expelled. The government's credibility was in serious question. Both Madhavrao Scindia and I were brought back," he replies. By the time the 1996 elections came, Chidambaram had quit even the Congress (I), protesting its tie-up with Jayalalithaa in Tamil Nadu. His new party, the Tamil Maanila Congress (TMC), swept the 1996 Lok Sabha elections in Tamil Nadu and he became the finance minister in the United Front (UF) government.

"Those were the best years. In the UF, nobody asked any questions. We all knew the government would fall, but till it did, you could do what you wanted. I slashed tax rates in the 1997 Budget, opened up FDI and carried out disinvestment. H D Deve Gowda was the prime minister. He was very fond of sleeping. I still remember, when I was reading the Budget, his Principal Secretary Satish Chandra was standing in for him and he was sleeping. All he was concerned about was if there was any mention of farmers," he recalls, his eyes lighting up at the memory. "Nobody has tampered with those tax rates in 14 years."

Chidambaram is on a roll. He recalls how he lost the 1999 elections and returned to "practising law, making money and improving my net worth" till 2004 when he became minister again.

He also recalls some of the cases he fought in this period: The telecom disputes that led to the consolidation of the sector via the court; the Chhabria family dispute and the case of The Indian Express involving the brothers. He also won the case for the Tatas, their right to locate a chemical storage plant on an island off Mumbai.

"It was an uninhabited island," he adds a little defensively, "Where could they have put it? India needs chemicals, right? And there are no deserts near Mumbai."

"So you made a lot of money, but you were not really in politics..." I say. "Not a lot. My fee is reasonable. You can ask anyone," he says, rattling off the names of his peers. Then his party merged with the Congress and he returned as finance minister.

How did he rate the intervention of the ministers who had preceded him?

"Jaswant Singh was forgettable. Yashwant Sinha had a mixed record. He put in place some things. But he didn't have a holistic perspective, a philosophy. His prime minister had no interest in finance. The deputy finance minister was a self-confessed ignoramus on finance. And who was his Planning Commission deputy chairman? Jaswant Singh." Chidambaram says.

"But he had a team to advise him," I point out. "Yes, Mohan Guruswamy  who ratted on him," Chidambaram returns. "His problem was the absence of a philosophy. By contrast, we had Rangarajan, Y V Reddy (whatever his views), Shankar Acharya, Ashok Lahiri, Parthasarathy Shome ... and a prime minister who knew exactly what to do and where to go. In the first year, we got 7.5 per cent and would have got 9 per cent last year, but for the world recession."

And what about the home ministry? "My impression is L K Advani spent all his time doing political management. Show me one initiative he took. Yes, after Kargil, he appointed a committee. But not a single recommendation was implemented. The National Counter Terrorism Centre (NCTC) was first mentioned by that committee. Why was it not implemented? There wasn't even a concept paper. In fact, he did great damage: He slashed IPS recruitment to 36, from 85, as recommended in the files. We have a shortage of 185 and it will take 11 years to fill that gap. Border fencing and electrification were going on. But that was all routine," he says.

But his predecessor was Shivraj Patil, not LK Advani. What initiative did the UPA government take during the Patil years?

"I can't comment on that. I was part of the government. But the National Disaster Management Authority was set up. The Crime and Criminal Tracking Network and Systems (CCTNS) was also set up then."

His big idea in the home ministry: The creation of the NCTC was mentioned almost casually at a lecture. After that, for a while, nothing more was heard of it ...

"Not at all. By December 31, it will have a building, some human beings, core data, so that various intelligence agencies can begin talking to each other."

Whom will it report to?

"Hopefully, to me. But that's a matter of discussion."

By now, we have come to the end of our delicious lunch. A small matter remains to be settled: Some greenish roundels on his plate. "What is this stuff," he asks. "It is tinda and it is really good for you," I say in my most motherly tones. "Tinda? I hate tinda. I never eat it," he says, spearing it with his fork distastefully and putting it to one side. "Yuk."

I have a last question. If there is one thing P Chidambaram is terrified of, it is having to handle the tears of women ("What are you supposed to do," he said, agreeing). Now this is part of his job description: Comforting widows. How did he deal with it?

He replies,"It's very hard. The other day, 10 Central Reserve Police Force widows... I made sure every family got a job. They will still get their husbands' salary for life. Each family will get between Rs 32 and 40 lakh. But how can you replace those who've died? Fighting back the tears... it's hard."