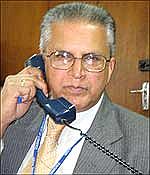 After the 26/11 terror attacks in Mumbai, India's security agencies have undertaken a series of reforms to ensure that similar attacks does not occur again.

During his hour-long address, Pillai dealt with various aspects of security while laying special emphasis on sharing intelligence.

Excerpts from the home secretary's speech:

India faces a threat from both internal and external terror, and counter-terrorism encompasses both these threats. The most important measure is intelligence, and if this aspect is not right, then consider 90 per cent of the battle lost.

What remains if intelligence fails is nothing but reacting to the situation, and hence, analysing intelligence is a very key aspect.

Post 26/11, intelligence sharing has been taking place on a daily basis. The Government of India is constantly looking for intelligence agencies that can piece together intelligence effectively. Such agencies, along with the counter-terror agencies, are the need of the hour so that we can eliminate as well as restrict the movement of terrorists, and if this happens effectively, then we are at a great advantage.

India as a country needs to take up these measures and also constantly upgrade our forces. Unlike the United States of America, we do not go on the offensive mode, since that is just not our policy. Hence, it is important that we upgrade our forces and intelligence so that the movement of terrorists is completely restricted.

On the international borders

We have large international borders and the Indo-Pak border is the most well defined one, apart from being well protected. While our Indo-China border is reasonably protected, the one which is worrisome is the Indo-Nepal border and is considered to be most porous.

India is also looking at introducing Unique Identification Numbers for all its citizens, and I personally feel that once this is in place, it would be a good source of security for all of us.

While work on the borders is underway, I could easily say that our biggest threat today is through the maritime borders. We are constantly upgrading maritime security, and by March next year, we would have added several more interceptor boats.

We have been constantly discussing this issue during various high level meetings. However, maritime security is not easy. There are lakhs (hundreds of thousands) of fishing boats, and it is almost impossible to monitor each one of them. We could put an interceptor on a big boat, but the smaller ones are a problem.

However, there should be no slip-ups once they land, since if they manage to dodge security and enter into the cities, it would become very difficult to stop them after that.

It is a well-known fact that we face a serious threat due to internal insurgency. We need quick intelligence in such matters in order to deal with this threat. What we have realised that several state governments are yet to wake up to this threat, and many states are not aware that a lot of activity is taking place secretively.

We have our para-military forces in place to deal with internal insurgency, but our police forces are understaffed. We have just 125 policemen for every lakh (hundred thousand) of people, and the government and the political class ought to realise that this is a serious issue.

The problem is that building police stations and increasing the police force does not earn votes. I say that these issues should top the political radar in the interest of the national security.

We speak of recruitment into the police force. However, we ought to realise that recruiting is not the problem. Training them is. There is a shortage of training institutes and trainers in the country, and it is time to take a quick call on this issue. With each passing day, the number of refugees is increasing in the country.

We ought to keep our eyes open to this, and if the situation develops, it is sure going to go out of hand and it will not be easy at all to deal with.

On lessons learnt from the Mumbai attacks

What one witnessed during the Mumbai attack was that each security wing was doing something different, which acted as an advantage to the enemy.

The first thing that the heads of each department ought to do at the time of such an attack is land up in the control room. From here the rest of the force is to be mobilised and the counter-attack coordinated.

In the first 15 minutes of the attack, security forces ought to know what exactly is to be done. During the Mumbai attack, this did not happen and hence gave the terrorists advantage of time.

Apart from intelligence sharing and strategy by security forces at the time of an attack, the forces also have to carry out mock drills on a daily basis.

There is no point in just planning things. Mock sessions in various locations and high-profile areas ought to be carried out, so that the forces have ample practice to counter a terrorist attack.