'India has a legitimate interest in Af-Pak' 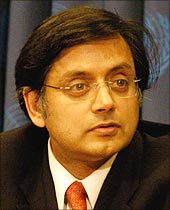 Refuting reports about India's concerns regarding Holbrooke, Dr Tharoor said, "His portfolio is very clear. His portfolio is what the Americans call Af-Pak -- it is Pakistan and Afghanistan. As far as we are concerned, we welcome Mr Holbrooke keeping us informed of this thinking and his deliberations."

It has been speculated that New Delhi was apprehensive about the Obama administration subtly attempting to extend Holbrooke's portfolio to include India.

But the minister was quick to add, "We certainly would not accept any hyphenation between his portfolio and us. But we have a legitimate interest in what is going on in that part of the world and we are very grateful that the US takes the trouble to keep us informed and to consult with us as this situation is being managed by them."

Dr Tharoor also reiterated India's commitment to Afghanistan, on the eve of that country's presidential election in the war-ravaged country, and declared that India was proud of the courage of its people.

"India is fundamentally committed to Afghanistan. We are very proud of our contributions to the development of Afghanistan, through our various development projects, which have cost a billion dollars now -- everything from road-building, hospital construction, schools and so on," he said.

"At the same time, we are really applauding the efforts of the Afghan people to go to the polls and enjoy the same rights as Indians enjoy -- that is the right in a democracy to choose their own leadership and to determine their own political destiny," Dr Tharoor added.

"We stand shoulder to shoulder with the Afghan people in this endeavour and we have both condemnation and contempt for those who would seek to disrupt Afghanistan's fledgling democracy through bombs," he asserted.

Speaking about Holbrooke's twice-cancelled visit to New Delhi, Dr Tharoor said, "Mr Holbrooke has good friends in Delhi. He is well regarded here and we would welcome him, but obviously there is the question of logistics. It's not a small matter because when a senior and distinguished visitor comes from abroad, we want to make sure that his official interlocutors are all available to see him."

"This is an area in which there is a lot of travel involved for senior officials as well as competing visits by other foreign dignitaries and foreign leaders," he said, and added, "So, it becomes very often a scheduling issue, which is then made out unfortunately by some to be more than it is."

Incidentally, Holbrooke had been visibly annoyed when earlier this month, after completing a trip to Pakistan and Afghanistan, he was asked whether there was a rift between him and India.

Holbrooke had disclosed that he was scheduled to 'visit India in mid-August' during the Independence Day celebrations. But that trip was cancelled as well, further fueling rumors that he was not wanted in New Delhi.