Tembhali Live: 'Our dreams will never be realised' 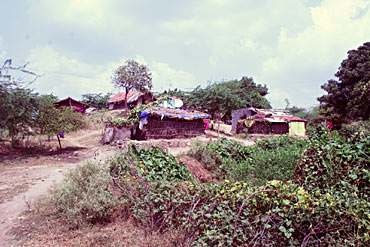 On the eve of PM Manmohan Singh's visit, rediff.com's Prasanna D Zore and Uttam Ghosh travel to Tembhali, a hamlet in Maharashtra's remote Northwest to have a look at the the first recipients of India's most ambitious social engineering project-UID (Aadhaar). The stark deprivation that they encountered has led them to pen this open letter.

The 1,500-odd adivasi-dominated villagers of Tembhali are agog on the eve of your visit as expected. Your cadres have left no stone unturned, in making you guys feel popular and tomorrow you will face a 2-lakh strong crowd if you believe one of your boastful former public representatives from Nandurbar.

The irony is very few of them and rediff.com did speak to quite a few -- know that you will be handing out unique identification numbers -- touted as one of India's most ambitious social engineering projects -- to 15-odd denizens of this village whose life will then never be the same again. The rest will come by post from Bengaluru, we are told.

The irony is these simpletons think that a man and a woman are coming to their village to protect them. They don't know who Manmohan Singh or Sonia Gandhi are. The villagers still think about "haath ka panja (The hand -- the Congress election symbol) and Indira Gandhi". They don't know much about unique identity.

The irony is adivasis are being paraded by your partymen here, as a piece of museum art. The people of Tembhali have got electric connections installed at their homes in the last few days. They have had to wait for so long to avail of such basic facilities. 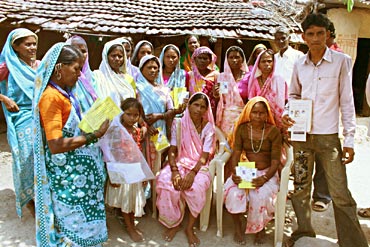 But to find them, you will have to visit small hamlets that are just a few metres away from the place from where you will explain the importance of unique identity cards and their benefits.

If you constrain yourself to where the organisers of Aadhaar in Tembhali (local Congress workers) want you to then you will perhaps miss our on these stark ironies.

If you too think that ironies are interesting and one can learn a great deal from them and improve the lot of India's teeming millions then do cross the 100-metre security barrier on Wednesday in any which direction you like and we can assure you will come across such ironies.

Because just 100 metres away from where you will connect with the people (they do hope to touch you), the concrete road ends. Just where this newly-laid concrete road ends, begin tales of lives of adivasis like 25-year-old contract worker Vansha Babu Teli, 55-year old Vasantibai Ram Pawar and 12-year-old, schoolboy Vishal Namdev Pawar, all Bhils, a Scheduled Tribe community.

While what you are going to read ahead are just three stories of Vansha, Vasantibai and Vishal, they represent what Tembhali and by extension India's teeming millions are going through. 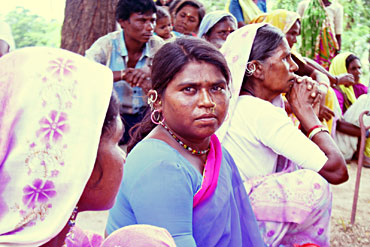 Vansha, a coy woman in her mid-20s walks seven km everyday (by everyday we mean whenever she gets work) at 8 am to Shahada, a prosperous town near Tembhali, from her mud-thatched dilapidated hut to work as a labourer. She lifts sand and cement bags and concrete waste on her strong shoulders from 9.30 in the morning till 6.15 pm for which the contractor pays her Rs 50 from which helps her feed her 10-member family that includes her parents, four sisters and three brothers.

The only good thing is one of her other sisters also earn the same sum, whenever there is work.

In the evening Vansha walks back -- she can't afford an autorickshaw, for it sets her back by Rs 5 -- after a backbreaking day, to her now dimly-lit home and eats chapattis made of bajra or corn along with chutney.

"The contractor makes us work in inhuman conditions and long hours," she says when asked if she has any complaints about the life she leads.

"Also, the fact that I don't get work everyday which leads to a few of us going hungry for a day or two," she quickly adds before we turn to Vasantibai Pawar.

Ask her if she has been registered with the local tehsil as National Rural Employment Guarantee Act worker and she feigns ignorance.

Here is the irony in Vansha's story: A 25-year able bodied wants to work for as many days in a week as possible (or at least 100 days in a year as promised by NREGA) but she doesn't find herself enrolled for either NREGA or Maharashtra Rural Employment Guarantee Act.

"The latter roughly translates to MAREGA (you will die)", says local activist Babu Naik, who has been working amongst the adivasis in Nandurbar. Image: A street in Nandurbar, the main town near Tembhali
Photographs: Uttam Ghosh/Rediff.com

A few days before it's time for most Indians to burn Ravana effigies across India on Dussehra, Vasantibai Ram Pawar and a majority of the adults in Tembhali village, begin their 300-km journey to Gujarat's Saurashtra region.

They stay in the open or if they are lucky then in pitched tents till Holi (the festival of colours celebrated sometime in March every year) gets over.

When the monsoon winds begin to blow from the Arabian Sea towards the hinterland sometime in late May they make the same journey back to Tembhali.

Here is the reason for this bi-annual ritual: They don't get any work for most of the eight months from October to May in Maharashtra. But in Saurashtra they can cut sugarcane, clear fields, work in the cotton and groundnut crushing factories where they earn Rs 100 per day.

Till about two years ago they would get only Rs 50 per day for their labours that is more tiresome and backbreaking then Vansha's.

Despite these hardships, they work in Saurashtra's scorching landscape because if they don't their young ones back home would go hungry. The only silver lining is when they get to Tembhali, they have a decent amount saved over eight months.

The monsoons in this green belt of Nadurbar-Shahada bring them no succour as the law of demand and supply catches up with them. More labourers mean lesser wages.

The local contractors take advantage of their illiteracy to cheat them of their wages.

"We don't understand too much about contracts. Whatever the contractor gives, we have to take it," says Vasantibai. When asked if the contractor uses force to shut them up she refuses to answer.

Dear leaders, we are sure you understand the economics of silence of the exploited.

"It then becomes difficult to eke out a living with our big families with less than Rs 50 a day that too once or twice a week," says an exasperated Vasantibai.

"Most of the days we survive on just tea, tamarind or tamarind leaves and ambada leaves, chutney and when days are not bad then either bajri or corn bhakri," chimes in Ambabai Thakur, another denizen of Tembhali.

The irony of  Vasantibai and her neighbours' fate is that they  aren't angered by their plight. They laugh it off. While civil libertarians worry about privacy issues, Vasantibai and many like her in Tembhali would want everybody to talk to them and tell the story of their lives for the world to know.

'It makes no difference if we dream or we don't' As we engage a group of Bhil men and women, we notice a young kid walk up merrily, in an unkempt and untidy school uniform and stand next to the group under the shade of a huge neem tree.

"Vishal Namdev Pawar," he says coyly when asked his name. "Baada (12)," he says instead of 'Baara' (the correct pronunciation of number 12) about his age, when the group of women, including his mother, begin to giggle at his lisp.

Vishal, a class VII student, scores more than 80 per cent marks in mathematics, science, social science and Marathi, the language of instruction at the local tehsil school.

"Our dreams don't mean anything much to us ," Vishal speaks like a mature person when asked about his dreams and aims in life.

"It makes no difference if we dream or we don't," his mother Shamabai interrupts without any  trace of anguish or agony in her voice. "We know they will never be fulfilled."

With just Rs 50 per day of work, once or twice a week and the annual migration to Saurashtra by her husband, it's a straight choice between hunger or education for the Pawars

"Sometimes our school teacher drives my son out of his class if his uniform is dirty," says Shamabai adding that he has only one uniform which he washes after every three days and uses it again the next day.

So, what do you do at such times, you ask Vishal. He quietly covers his face with both his hands and cries.

The irony of Vishal's existence is that though he is poor and he dares to dream.