Sign in  |  Create a Rediffmail account
Rediff.com  » News » Tembhali: End of the road for a 'model village'?

Tembhali: End of the road for a 'model village'? 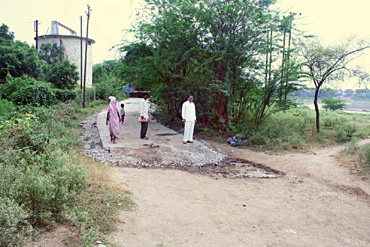 Prasanna D Zore and Uttam Ghosh travel to Tembhali, in Nandurbar district of Maharashtra, ahead of PM Dr Singh's visit to the hamlet to distribute the much-talked-about Unique ID to the villagers. But the gross reality is at a stark contrast from this make-believe 'model Indian village.'

Good times seem to have descended on Tembhali, a small hamlet in Maharashtra's Nandurbar district. But only just.

Ever since news broke that Prime Minister Dr Manmohan Singh will visit Tembhali, to give the Unique Identification Numbers to a batch of 15 adivasis, the village seems to be having a ball.

In 25 days flat since then, the tehsil's public and works department have played wonders with the dusty, mud-strewn pathways that the 1,500-odd villagers would take to reach their houses.

Mud has been replaced by concrete in any direction you move, so that India's PM and Congress President Sonia Gandhi get to see a model village.

The truth, however, ends just 100 metres away from the spot designated for the dignitaries -- that include the likes of Maharshtra Chief Minister Ashok Chavan, Deputy CM Chhagan Bhujbal, Governor R Sankaranarayanan and UIDAI chief Nandan Nilekani.

The concrete road abruptly gives way to a mud stretch as far as the eye can see.

Does that ring a bell? Is that the end of the road for Tembhali?

One way for the VIPs; the other for the aam janata 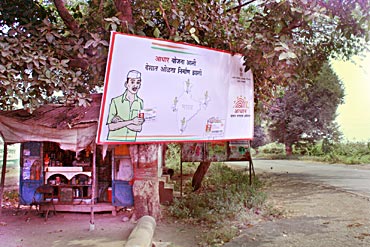 Once you take a left turn out of Shahada and move straight to Tembhali, the road branches out into two routes. A banner humbly suggests: This way for the aam janata; this way for VIPs.

We wonder if unique identification numbers will ever breach the divide between the aam and the VIPs? Our guess is as good as yours.

Is the government trying to kill two birds with a stone? 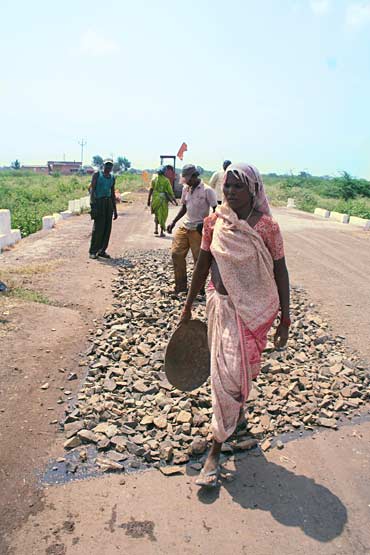 Image: Govt's dual-strategy: Pave the road plus give work to labourers as part of the NREGA
Photographs: Uttam Ghosh/Rediff.com

En route to Tembhali, you come across a number of road pavers working busily with a couple of contractors goading them to move quickly.

The road has to be paved and tarred by 4 pm on September 28, so that the VIP cavalcade -- including that of the mukhya mantriji  -- will be taking this route on Thursday morning for their tryst with Tembhali.

Wonder if this will be their first visit to Tembhali ever? I can already here murmurs cursing Aadhaar's launch from Tembhali.

Plus this is like killing two birds with a stone: Pave the road plus give work to labourers as part of the National Rural Employment Guarantee Act.

"How we wish the PM comes to every such village in India every six months," whispers a contractor into our ears. 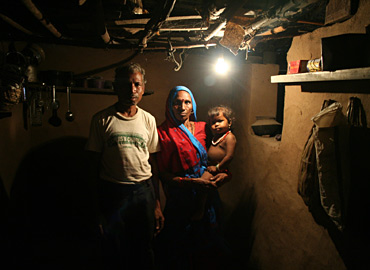 Image: Now there is electricity as well as new electric meters installed in many of the nearby houses
Photographs: Uttam Ghosh/Rediff.com

With the PM's visit it's not only the PWD that is in the overdrive.

The local electricity distribution service, that is the part of Maha Vitaran, too are bending their backs to supply live electricity to villagers, lest the PM and Soniaji decided to take a walk behind a certain Lakshman rekha that the Congress workers would secretly wish the dignitaries should not cross.

Double the fun, isn't it? Get light without paying for some villagers

Finally, a few lucky Tembhali villagers are now able to experience the light as it were.

Interestingly, Tembhali faces only four-hour load shedding between 10 am to 2 pm. Now, these adivasis too can study when the sun sets and cook their food without worrying about the darkness.

Will UIDAI change their future for good? 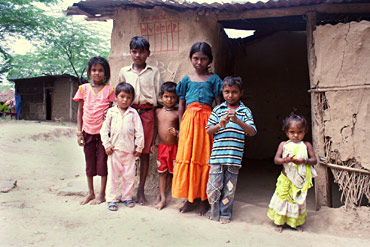 One wonders if the entire hype and hoopla will die down as soon as the PM and his colleagues fly over the Satpuras back to the safe environs of New Delhi and Mumbai.

For, like the concrete road that ends just 100 metres away from the place from where Dr Singh is likely to address the people, the local goons and contractors will go back their usual exploitative way, says activist Balu Naik who has worked for the adivasis in Nandurbar for the last 17 years.

What kind of a future can the PM and Sonia Gandhi promise to these unfortunate people? We will see that six months down the line.

A Che Guevera in Tembhali? 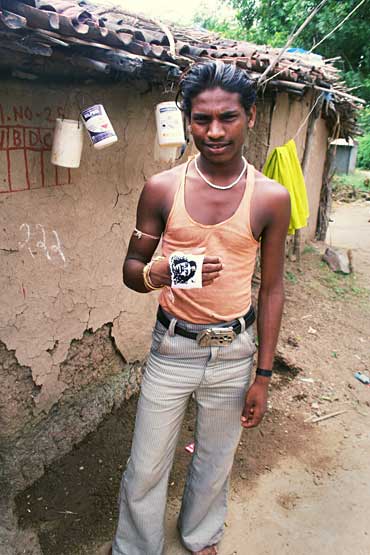 We doubt. The adivasis are quite placid and mean no harm to anybody.

They don't get angry at their plight. They blame it on their fate. With such attitude one wonders if the Che Guevrera band on this gentleman's hand is the sign of times to come.