'There's no hope for an out-of-court settlement' 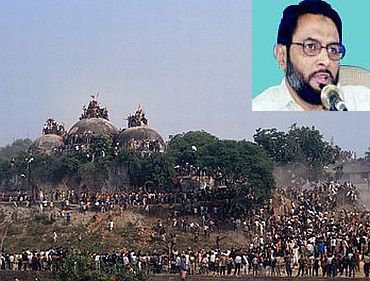 A final attempt will be made on Friday, September 17, to settle the Ayodhya dispute out of court.
Dr S Q R Ilyas, convener, Committee on Babri Masjid for the All India Muslim Personal Law Board, says the court has suggested an out-of-court settlement many times in the past, but it has never worked.

In an interview with Rediff.com's Vicky Nanjappa, Dr Ilyas says he sees no hope for an out-of-court settlement this time too and adds that, on his part, he would ensure that there is no violence post verdict.

What would be your submission on September 17 when the court calls out for an out-of-court settlement?

We will speak, but there is no hope whatsoever in an out-of-court settlement. The court has tried this several times in the past and there has been no solution.

I don't see anything different this time.

'The other party is adamant in their stand' 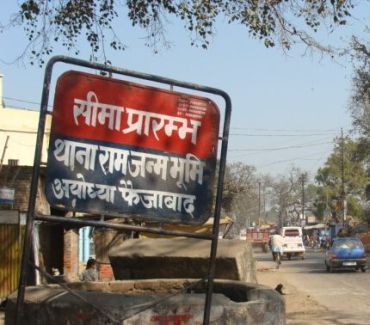 Why do you say there is no hope?
The other party is adamant in their stand. If this is the attitude, then there is no point in sitting across the table and talking.

There has been an effort made in the past to sort out the issue, but it has never worked.

Why do you say the other party is adamant? Why don't you hear them out?

They have only one stand in the matter -- the mosque should be shifted out.

Do you call that a settlement? I am sure the stand would be the same tomorrow (on Friday, September 17) as well.

Asking us to shift the mosque is not a settlement.

This is the issue. They say a temple existed over there. Records don't show that.

The records state a temple had been created in that place. There was no temple before 1949 and the idols were installed there only after that.

This is a title suit and let the court decide that.

'Asking Muslims to leave the disputed site is no compromise' 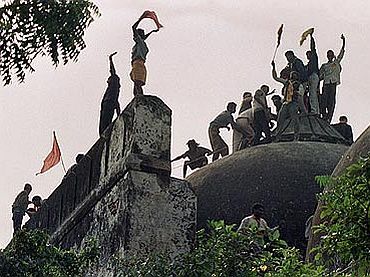 Do you think the other party will make a compromise? What is your reading of the mood?
They want to construct the temple on the same site.

We have spoken to them in general and in detail several times and the only thing they say is, 'Leave that land to us.'

On September 17 too, it will be the same. I think there is no point in discussing that.

There has to be a compromise. Nothing is impossible.

A compromise does exist, but no one gets that point clearly.

In 1993, the Government of India acquired 67 acres of land and had said there would be a temple, a mosque and a library on that site.

This matter had come up before the Supreme Court. The court had said that whoever wins or loses, they would still get land to construct the temple or the mosque.

There is a compromise that exists to this effect.

However, the core issue is the land on which the mosque exists and that has to be decided by means of a title suit.

What more is there to compromise?

I don't think asking Muslims to leave that place totally is a compromise in the first place.

'We will not celebrate if we win the Babri suit' Bharatiya Janata Party activists played an important role in the demolition. What do you think the BJP's role would be now?
The BJP has no role to play now.

The matter is before the court and it all depends on how the Union government acts on this matter.

Dr Ilyas, the bigger issue is the violence that could follow whatever judgment is pronounced. What steps have you taken to prevent that?

Why should there be violence after the court has delivered its verdict?

We have instructed all organisations, boards and institutions to maintain calm even if the verdict goes against us.

We have also told them not to celebrate if we win the case. We expect the other party to do the same.

Moreover, there is nothing to fight about or celebrate after September 24, as this will not be the final judgment.

The matter will go to the Supreme Court in any case.

'We have waited for nearly 5 decades. Why wait more?' 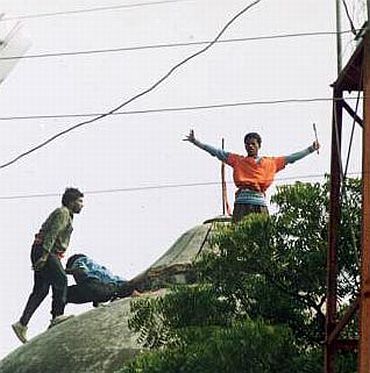 The intervener application appears to be a delaying tactic. Do you agree?

Yes, to me, it appears that way. Why should anyone delay the verdict?

If there is any more delay, then the matter will have to be re-heard since one of the judges on the bench will retire on September 30.

What is the meaning in delaying the verdict?

All of us have waited for nearly 5 decades. Why should we wait anymore?