Give India a chance... it is a happy place! 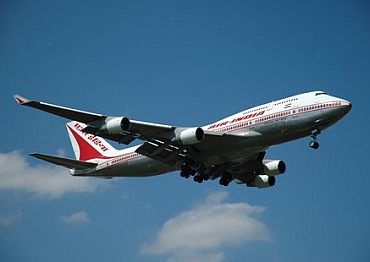 Vaihayasi Pande Daniel believes that as chaotic as India is, one never ceases to wonder how the country endures, survives, gets better and eventually glitters even as its heart does!

I quite understand you are rather exercised over your plans to move to India. I am sure it was a tough decision.

I love India and that is why I have chosen to return and live here. But I have never tried to sell the concept of returning to India to you folks (you and our sister) mainly because I am not sure it would work for you.

But now that you have made this decision to move back to India after 27-odd years -- you were last here when you were just a teen in college -- I think it's foolish to waver. Hold your course.

When you arrive in India, later this month, stick it out for whatever time it takes to judge whether you can survive here. Look at it calmly. It's difficult to decide on India instantly. Remember how much you hated T initially after moving there. Gut reactions are quite often accurate for people, but not places. So hang in there.

Also Read:
Ten pointers to a new India
Saisuresh Sivaswamy's take on the state of India
Young India bristles with hope, confidence
Desperately seeking Ramanujans
God, give us independence from what ails India
8 things India needs to do urgently

What to expect from India 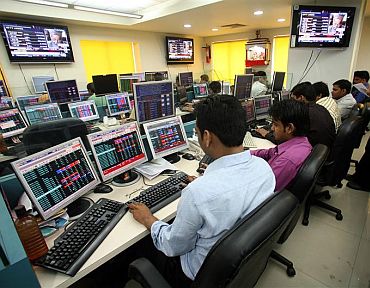 A stint in India will be beneficial -- even for B and little R -- in ways that are not always evident. There will compensations that defy measurement, so don't be impulsive.

Since I am the only one in the family living in India full-time, I will write you a few tips on how to handle India initially and, more important, what to expect and what not to from India. Here goes...

In The New York Times and other international newspapers, as well as on Indian Web sites, you have probably been bombarded with articles about the New India and the giant leaps the country has been making.

There are the swish malls where Hamleys of London, Zara and Apple have opened shop, the gated communities of Gurgaon, the new toll highways, the world-class universities like Hyderabad's Indian School of Business, spotless hospitals like Mumbai's Kokilaben Dhirubhai Ambani Hospital and campuses like Infosys in Bangalore.

You need a whole lot of patience around here 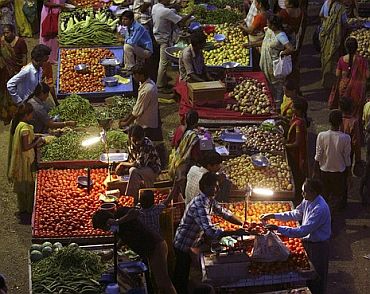 Indeed, India is booming. India is now pretty much operating on an international level. It's a little short of being a Singapore or a Milpitas, or even a Dubai or Beijing, but we are getting there.

In India, life is still a struggle. You have to be vocal to survive. That is the score, like it or not. It is a fight to get things done on an everyday basis. It is getting a little less so, as the efficiency of Indian life improves.

But I am perennially e-mailing bank presidents, managing directors, police honchos and consulate officials, to get stuff done or to complain. Contacts are still the only way stuff gets done -- jhatpat -- even in the private sector.

Getting a gas connection, repairing a phone, recovering a stolen car, is still more complex than it needs to be.

You need a whole lot of patience to manoeuvre your way around India. Patience tempered with persistence.

Indians are some of the nicest people in the world 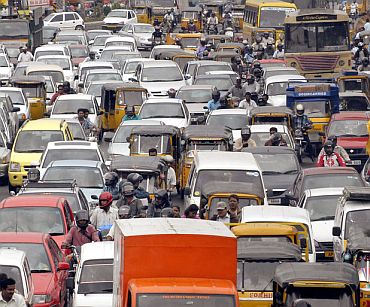 Patience and the strength to handle traffic jams because of monsoon roads that resemble lunar craters, inexplicable electricity cuts, unruly lines in railway stations, crowd aggression, the weather (when it's hot, it's very hot; when it's rainy, it's very rainy), beggars, touts, eve-teasing, poor or too expensive medical facilities...

We are a people country, and that is our greatest strength. And there are lots of them, mostly all nice (of course, the devious are very devious). I think Indians are some of the nicest people in the world, though without question, this is a huge generalisation.

But ever so often, when you get mad or fed up with India, or aggravated about something that is not going right, or disheartened at the way India does things, it is the thoughtful, extraordinarily helpful gesture of some ordinary person, someone you may not even know, who just makes that aggravation go pooff.

Indians, generally, very much love people, who, more often than not, bend over backwards to help. We all struggle to have a better life and that is why you find so many who will help you negotiate a spot of trouble. India is also a welcoming place.

It's a society that welcomes and accepts everyone 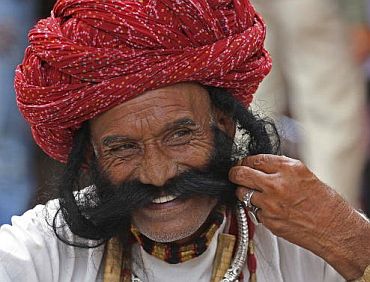 The world may really be a global village, but most places cannot beat India for its warmth. It's a society that welcomes and accepts everyone.

Indians are -- again, with exceptions -- gentle people. We muddle up our dialogues with Pakistan, give terrorists honourable burials in special cemeteries in Srinagar and have been invaded many times by so many waves of foreigners, because we do not know how to put up a good fight. India does not have a particularly colourful history as invaders.

Or for that matter as explorers or proselytising priests -- no Livingstones, or Vasco da Gamas or St Francis Xaviers. Perhaps only Vivekananda stepped beyond our shores to speak about religion.

Take a place like Kerala (Christianity arrived in 52 AD), where Jews, Hindus, Muslims and Christians have lived together harmoniously from the beginning of time. The Jews only began to feel unwelcome after the Europeans arrived.

Or take Ladakh where Moravian missionaries ended up growing potatoes in the 1800s because they could not convert the permanently content Buddhist Ladakhis to Christianity. 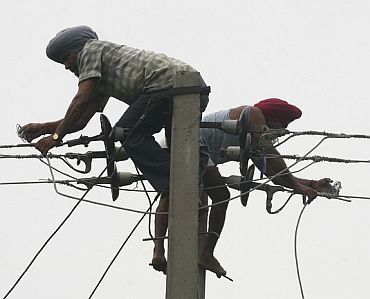 The word 'yes' often does not have meaning in India. If you ask the contractor whether the apartment you are renovating will be ready by a certain date, he is sure to say, 'yes, yes, yes, sir'.

He will keep saying yes even when the place looks like a dusty hellhole and you were meant to move in yesterday. You need to keep questioning that yes at every point if you hope to make progress.

People are always keen to please -- perhaps it's a cultural thing -- but they are just unable to say no. Even when they say 'no' they nod their heads in a way that looks like a 'yes'.

India's peculiar, upbeat contentment, so hard to fathom, is also a huge strength. Western theories put it down to our belief that we expect to have a better life in our next birth.

But is that what it really is? It's so amazing -- and almost spiritually gratifying -- to visit a crowded, squalid urban slum or an impoverished Madhya Pradesh village (no electricity, no schools, no health care and no water) and not discover a glum face.

India is a happy place 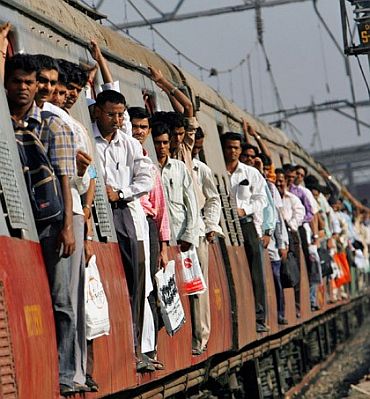 People live with unbelievable misfortunes, but they take it in their stride and are able to smile and go on with life. This chalta hai noisy buoyancy becomes, over time, contagious.

Whatever its gross domestic product or life expectancy, India is a happy place. And her happiness becomes a drug that you depend on for your survival.

Whenever I get off the plane in London or Newark or Munich, the deathly, squeaky-clean quiet, where no one speaks above a murmur, suffocates.

In homes abroad, phones never ring and the doorbell never goes off unexpectedly. No unannounced visitors, ever. Please!

India's strange content manifests itself in other odd places. Our much-examined arranged marriages probably work on the premise that the spouse chosen by the elders is the only one you are going to get -- be content.

Life in India dazzles with its colour 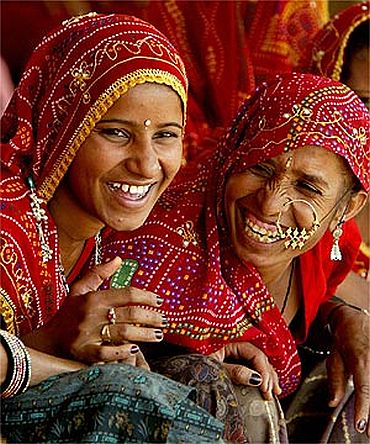 One feeds off India's unbelievable energy and variety. No two days are ever the same and one gets addicted to this lack of predictability -- of life always being on a high, on steroids.

You can be sure that when you greet the day in the morning, you have no idea what to expect.

Life in India dazzles with its colour, variety and lively dynamism. As historian and writer William Dalrymple once told me, "Every day, I am still surprised by this country." Every day! Half an hour before you were here, MTNL (Mahanagar Telephone Nigam Limited, the government-run fixed-line telephone utility in Mumbai and New Delhi), were here to connect the Internet. The whole question of how far you give baksheesh and the knowledge your Net is going to stop working tomorrow if you don't give Rs 500... enjoyable state of muddle."

Indian people are also about obligation and duty. These are heavy, dull words, but they are the backbone on which India runs. Unlike more moneyed, developed and selfish societies, we constantly labour under our obligations.

No friend or family member is so unimportant they can't be helped.

We smother people with our hospitality 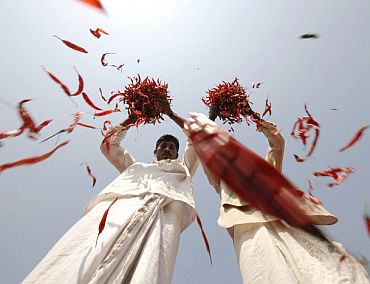 We are constantly obliging someone with a favour and it is assumed that they will return the favour. No favour is too big, nor an obligation too large.

We go out of our way to help each other and we do not expect a word of thanks because it's about being hospitable.

You are always welcome to stay in my home and me in yours. Hospitality is a law of everyday life. We smother people with our hospitality (atithi seva). Food is part of our hospitality and every Indian loves to feed his guest -- just a glass of water for a guest?

And a trip to another society is totally baffling as you try to decipher their agony over an unexpected visitor or that they have to actually get out of their own skin to help someone -- tsk, tsk, such obligation.

I am often asked by relatives living in Park Lane or Scarsdale -- or whatever tony address -- why I chose to work as a journalist in India and not in the United States or Europe.

Give India a chance 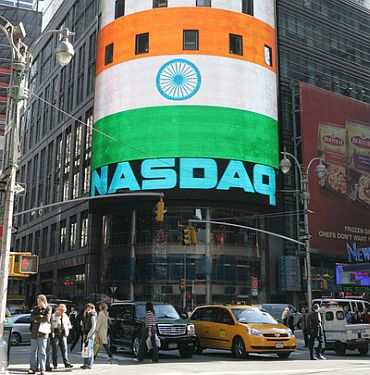 But an economist I interviewed recently told me, "Boss, the action is all happening here." And that's so true. As a developing country whose galloping growth is amazing the world, there is really much more to do here that will keep you energised, than many other places in the world.

As a journalist, many of the stories one wants to do or the photographs one dreams of shooting, are in India.

That goes pretty much for other professions too -- more people to educate, more people to help, more buildings to be built, more problems to be solved, so on.

And as chaotic as India is, you never cease to wonder how does this country endure, survive, get better and eventually glitter, even as its heart does!

So, V, give India a chance.

Lots of love,
Me

Vaihayasi Pande Daniel, Associate Editorial Director, Features, Rediff.com and India Abroad, is half-Estonian, was born in Canada, grew up in America, did her high school in Jharkhand, India, returned to America for a stint, married a Tamil Christian and has lived in Mumbai for 24 years.