A year after YSR's death, Congress still in shock 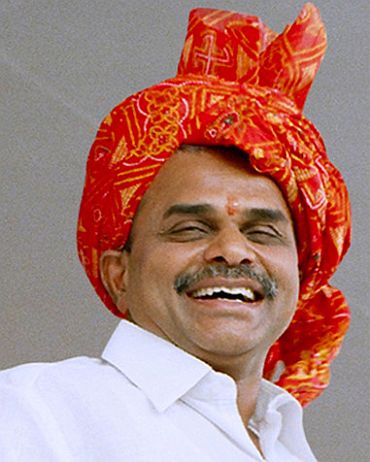 A year has gone by since the death of Dr Y S Rajasekhara Reddy, one of most popular leaders of Andhra Pradesh.

As the state observes the death anniversary of YSR (as he is popularly called) on Thursday, the road ahead for the Congress appears to be bumpy.

The Congress is yet to come to terms with the two major problems it faced after YSR's death -- the Telangana issue and Jagan Mohan Reddy.

Political observers tell rediff.com that these two issues will continue to haunt the Congress unless it puts its act together. 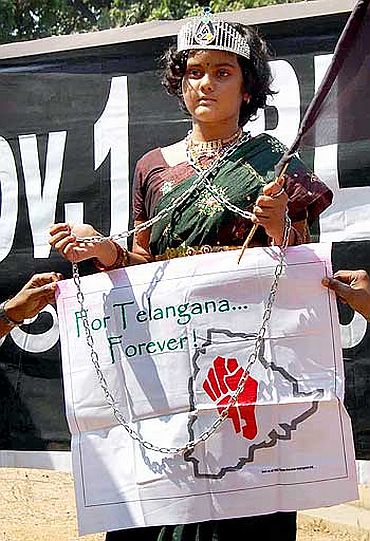 The Telangana issue was the first set back for the Congress. Just a few months after YSR's death, the state saw one of its worst agitations ever.

YSR loyalists say that their leader had managed to strike the right chord with the people of Telangana and over a period of time kept the people quiet.

He earmarked a lot of funds for this region and despite not living up to his promise of granting a separate state in the 2004 elections, he still managed to win 50 of the 110 seats in the Telangana region alone.

In the 2004 polls, he tied up with the Telangana Rastriya Samithi, promising them a separate state. However, he backed out later. Despite this he managed to win a large number of seats in this region while the TRS was left with just 10 seats in 2009.

The current leadership does not appeal to the people 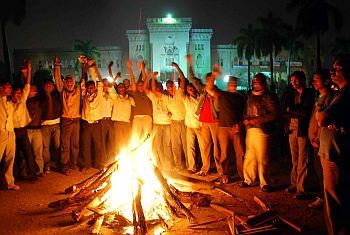 The Congress in Andhra Pradesh claims that the issue would have been controlled if not for a very irresponsible statement by Home Minister P Chidambaram.

That statement of his gave the people hope and once the Union government did a turn around, it angered the people even more. Moreover, the state lost Rs 100 crore every day for the three months that the agitation continued.

Even after a year, it is quite evident that many in the state have not yet come to terms with this loss. The current leadership does not appeal to the people, who tend to hero worship and idolise their leaders.

It is very clear that that YSR's son, 39-year-old Jagan Mohan Reddy, made a serious attempt to capitalise on the popularity of his late father.

It is evident that there is division within Congress 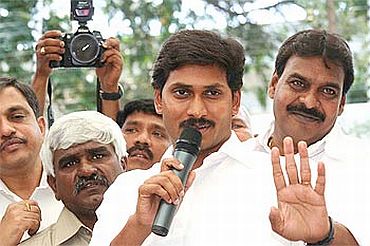 Political observers say that it is not the Telangana issue, but the division in the party that is the major worry for the Congress.

If one looks at the manner in which events have unfolded in the past few months, it is evident that there is a division.

Jagan has defied the high command on every occasion and MLAs who would have thought a million times before speaking against YSR have now started to allege corruption by the family.

The road ahead for the Congress is clearly not an easy one and Jagan has no intentions of making it easy for them.

YSR led a one-man show all the way 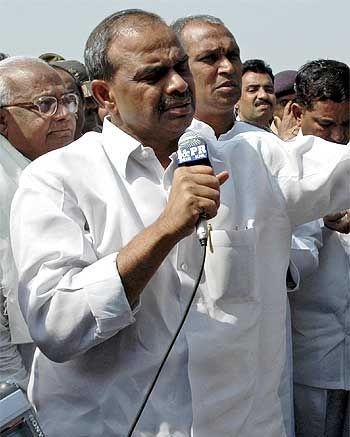 GVL Rao, a political observer, says that the Congress today realises that the roller coaster ride for the party after YSR's death is over.

YSR led a one-man show all the way and earned the trust of the central leadership.

He managed to strike the right chord with the first family of the party by naming every project after either Indira or Rajiv.

Moreover, he had impressed the party by winning both the 2004 and 2009 polls single-handedly.

YSR had completely transformed himself from being a perennial dissident 20 years ago, throwing slippers at late prime minister P V Narasimha Rao, to becoming a darling of the party when he took over as the Chief Minister.

Telangana will be back to haunt Congress soon 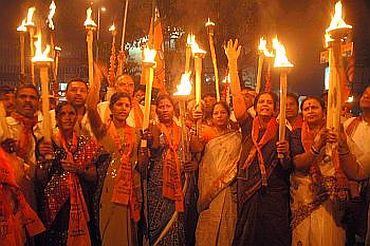 Now with YSR gone, the Congress has a road of thorns ahead and faces a lot of crisis situations. The Telangana issue is still in their minds and is expected to return in a couple of months.

Also, the Congress is well aware that it cannot do away with the Jagan issue so easily.

When Jagan sought the post of chief minister, the Congress was clear that it would want him to wait like Rahul Gandhi is doing now.

Moreover, they were worried about the emergence of a mass leader who would take Rahul on directly at least in parts of southern India.

However, Jagan's instincts were different and he reacted the same way his as father did 20 years back. But the Congress wanted him to show the same maturity that his father did when he took over as chief minister.

Today, it is a matter of who will blink first 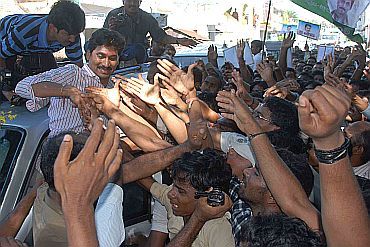 For Jagan to break the Congress at this point of time is very difficult. There is no doubt that he enjoys the support of many MLAs whom his father had handpicked, but the question is that whether they are ready to forgo their leadership when the next elections are 3 years away.

These were the same MLAs who had supported Jagan in the beginning, but today they appear to be on the fence, probably, due to the lure of power.

Today, it is a matter of who will blink first. Jagan certainly is a brand, but at any cost would not move away from the Congress. Floating a new party is not advisable and there is no question of him either aligning with the TDP since he will project himself as an alternate to that party.

Also the caste factor will keep him away from the rival Telugu Desam Party. The Praja Rajyam Party, on the other hand, is a non-existent force. 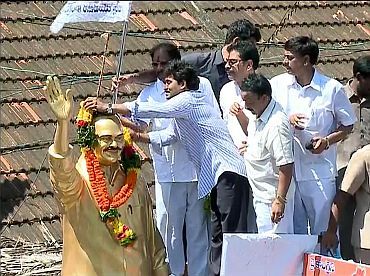 Jagan wants to be the real Congress of Andhra Pradesh and would want to bulldoze the central leadership to hand over the power to him. He may have gone a bit silent today, but that will not be the case for long.

The Congress too will not take any hasty decision. They realise the importance of Andhra Pradesh, as it has done wonders for them number-wise. If the Congress breaks Jagan, then they may run the risk of being reduced to 10 seats in the state.

In the months to come the Congress will try and enter into a dialogue with Jagan and offer him some position that would meet his expectation. They would do everything to ensure that he does not emerge into a super power considering the legacy, personal clout, media power and financial backing he has.

Will the high command stomach the insult meted out by Jagan to them? Will they bite the dust or counter him? This is something that only time will tell.