Unimaginable scale of devastation in Pak 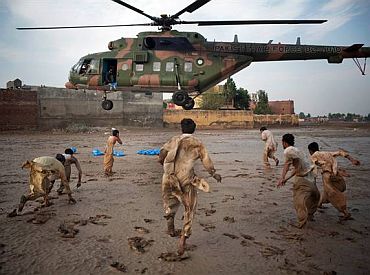 Irfan Mufti assesses the immediate and after-effects of the devastating floods in Pakistan, and urges the Pakistan government to pull up its socks and deliver

With monsoon rains continuing, the worst flooding in Pakistan in 80 years is still spreading.

Pakistani relief organisations and government agencies are stretched to the limit. Yet, despite urgent appeals from the United Nations and other aid organisations, the level of international aid is pitiful, even measured against the limited assistance donated in other recent disasters.

The flash floods in several parts have already damaged the country's economy and will leave a mark on the country's agriculture and economic growth.

According to early estimates, more than 20 million people (almost 13 per cent of the country's population); including nine million children, are directly suffering the consequences of the floods.

This figure does not include those who are now indirectly bearing the burden. This is, by all counts, the largest ever water splash in the 64-year history of Pakistan.

The enormity of the damage can be judged from the fact that 10.5 million people have been displaced and over 3000 are dead (the actual count will be known later, once the water recedes. Also, many deaths are likely to be unrecorded).

In the last 64 years which saw the 10 biggest natural disasters of Pakistan that include floods, droughts, earthquakes and storms, the latest tragedy is by far the largest ever to have happened to this country.

The Swat Valley in the worst affected province -- Khyber-Pakhtunkhwa (formerly the North West Frontier Province) -- is cut off, trapping an estimated 500,000 people.

Most people are yet to receive aid 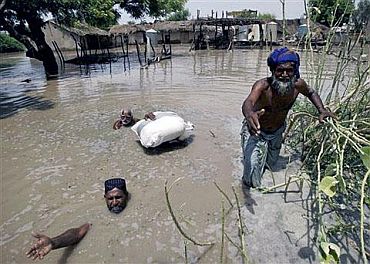 Most have received no relief supplies, except small quantities being transported into the areas by foot or on donkey-back. In other parts of the country, flooding is threatening major cities and towns.

At the moment more than 10.5 million people are on the move on the roads of this country looking for refuge and shelter.

A very small fraction of this population has so far found shelters in government facilities or temporary camps set up by NGOs and philanthropists.

A majority of this displaced population is still living in open fields and without proper shelter, food, medicines or protection. Most of the make-shift camps are without essential services and poorly managed.

The trauma is still not over 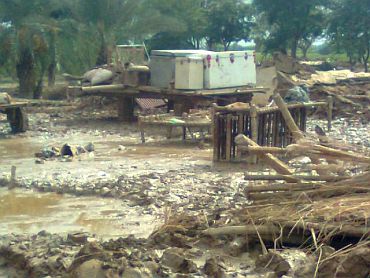 Government schools are used to camp displaced populations and most of these buildings are already in a dilapidated condition and cannot house victims for a long time.

The government and humanitarian agencies have not been able to set up tent facilities, thus increasing the risk of shocks and vulnerabilities.

The food, medicines, water, non-food items and temporary shelters provided by government, NGOs, philanthropists and international groups are far less than the demand.

It is predicted that the trauma is still not over as more monsoon is predicted, which will add more volume of water in the river system.

It is said that the total volume of water in the Indus river system is not exceptionally high for the river system to absorb.

Blame it on low level of preparedness 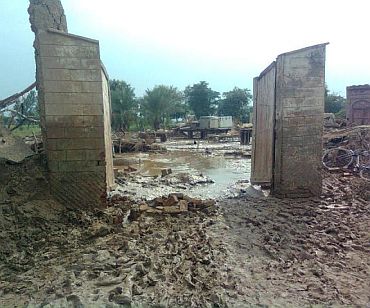 The disaster happened because of lack of attention to maintenance of river embankments, silting of riverbeds, weak water protection infrastructure, massive deforestation and unplanned settlements in riverine areas.

All these factors contributed a great deal in the on-going ordeal of the people. Level of preparedness to cope with the impending disaster was very low.

Though there are several disaster mitigation and management systems and authorities set up in teh last few years, their performance is far below expected standards.

Ironically, most of the people who were either forced to leave houses did not know where to go for shelter, food, medicines and other basic facilities. 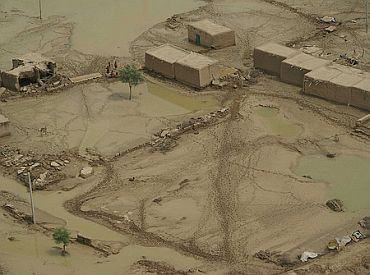 No government information facilities were set up or prior arrangements were made.

Tragically, the flood hit the most fertile food growing areas. Gilgit, Swat, Charsada, Swabi, Nowshera to Larkana, Dadu and Matiari are food growing pockets and contribute a reasonable share in the country's food and grain economy.

Major losses of crops, orchards, cattle, fodder, cotton and other major cash crops will pose a serious setback to the economy. This will create food scarcity and insecurity for many coming months.

Some of these crops are export-oriented and consequently, Pakistan will face a decline in export earnings. 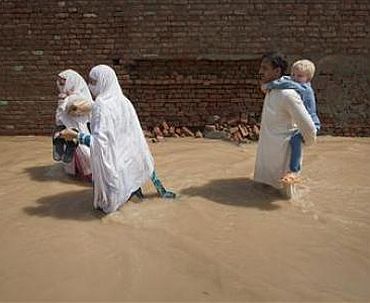 Transportation of goods and people is already effected. It has also destroyed buildings, factories, warehouses etc and closed down work in these places due to which not only will the workers suffer but also the industries.

In the coming months the government has to invest huge amount of funds and manpower in the rehabilitation of people and industries, which will cause the economy to suffer at the national level.

The mass displacement of population will tax the cities' scarce resources and put a load on nearby towns. 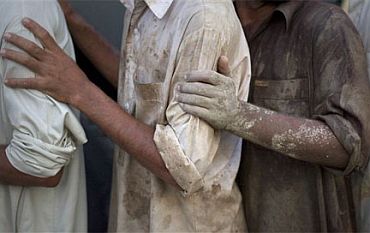 In previous years, the flood damages/loss as a percentage of the total GDP was significant.

If the damage due to cyclones and storm surges were taken into account, the overall loss as a percentage of the GDP would be much higher.

It may be noted that the GDP values are at 1985 prices. 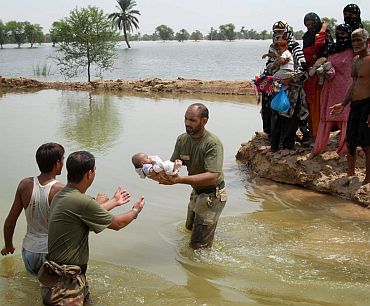 The structure of the flood damage losses and their relative weightage to total GDP have not been taken into account.

However, the estimates provide a notional indication of the impact of flood damage/loss on the economy.

It may be mentioned that floods cause losses both to the GDP and to capital stock and thus hamper the growth potential of the country.

Moreover, these losses also have long-term impact at a macro economic level.

The long-term impact will be twofold: capital damages induce a lower GDP in subsequent years (to the extent of investment losses); and output losses (caused during the flood-affected year) lower incomes and possibly, reduce savings available for financing investments.

Anger and protests will inevitably spread 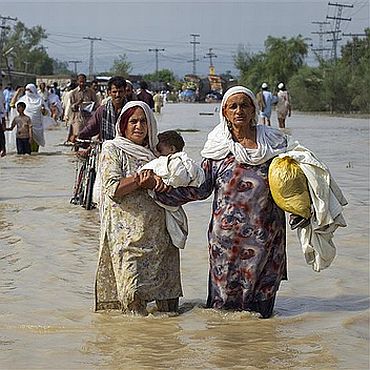 In addition, there will be enormous social losses due to this flood, the impact of which on the macro-economy is much more than micro-economic losses in terms of accelerating the growth potential of the economy.

However, as yet there is no comprehensive source that provides information/analysis of the possible macro-economic impact of current flood losses.

The government was already facing widespread hostility over its proxy war on behalf of the United States against Islamist militants, and the country's economic and social crisis.

Now the floods have wiped out large areas of crops, destroying the livelihoods of many farmers and leading to higher food prices.

As the flooding worsens, anger and protests will inevitably spread, compounding the crisis of a fragile regime.

International aid is only trickling in 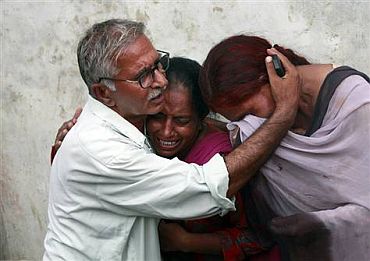 Despite the immense scale of the disaster, international aid is only trickling in.

As of early last week, according to the UN's financial tracking system, the funds committed by governments totalled less than $45 million, with an additional $91 million pledged.

The government has so far failed to mobilise external and domestic resources.

This delay will limit government ability to restore human settlements, rehabilitate agriculture and rural economy, rebuild infrastructure, provide safe and timely return and recovery of these people and reduce strain from urban centres.

All these will be contributing factors in multiplying the shocks from the disaster. The government's credibility deficit and lack of trust on the part of funders are also worrisome factors.

What the government MUST do 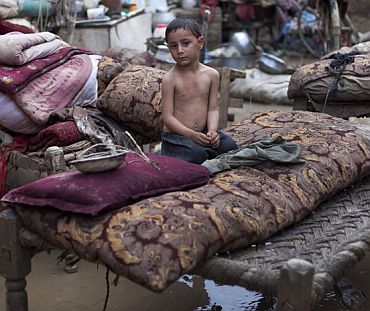 The sheer size and scale of the devastation requires a much higher level of support, failing which the government's capacity to deal with the domestic issues -- mainly terrorism, recession, inflation and high scale of unemployment -- will weaken.

It is much needed that all stakeholders including donors, investors, humanitarian assistance organisations, aid consortiums and other economic powers must invest in this time of crisis to avoid any undue spillover from the situation.

It is needed that the government assembles all key stakeholders on one platform and develops a disaster management plan with the greater participation of civil society and effectees.

All emergency, relief, early recovery, rehabilitation and resettlement efforts must be done outside the ambit of usual government structures. Only an independent commission led by credible personalities can ensure greater participation, trust and optimum results from these efforts.

So far the government has failed to show its resolve 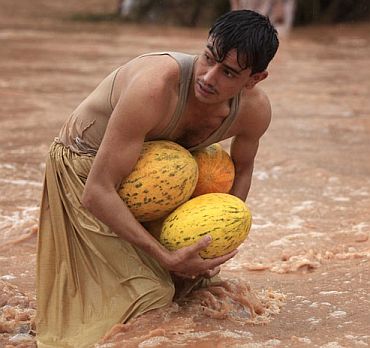 In the meantime, the government must demonstrate its political will. It has to put these people as its first priority and put other government agendas on the second list.

So far the government has failed to show its resolve and leadership in tackling the problem.

The present disaster will also be a test for the present political government as most effectees are also the voters of the ruling party and rightly expect urgent and substantive support.

The government has to cut down on its expenses, mainly non-development expenditure, and divert these resources to the much needed relief and rehabilitation of these 20 million people. Otherwise we will face serious repercussions for the country as well as the present government.