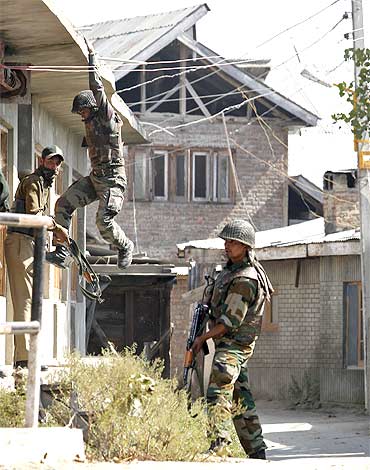 Image: A soldier climbs down from a residential house during a gunbattle with suspected militants in Maloora on the outskirts of Srinagar
Photographs: Danish Ismail/Reuters

The United States should 'publicly expose' Pakistan whenever it fails to prevent infiltration across the Line of Control with India, shut down jihadi training operations and make the Inter Services Intelligence and Pakistani military pledge that 'they will not abet violent actors' in Kashmir, a US think-tank has said.

Releasing a report on Indo-US relations ahead of President Barack Obama's visit, the Carnegie Endowment for International Peace said the Kashmir issue is a challenge that the US can neither avoid nor resolve as New Delhi has the power to 'rebuff' any unwelcome US involvement.

"Washington can do more than it typically has to hold the Pakistani military and the ISI to pledges that they will not abet violent actors in Kashmir," the report Toward Realistic US-India Relations said.

India should not expect US to stay silent 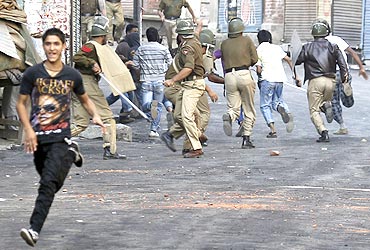 "At a minimum, the United States should expose Pakistan publicly whenever it fails to act to prevent infiltrations across the Line of Control, shut down Jihadi training operations, or arrest leaders of organisations that foment attacks on India," the report authored by George Perkovich said.

At the same time, the report said, Indian leaders must also do "more to correct the misgovernance and human rights abuses that are remobilising Muslims in the Kashmir Valley."

"Indians may reasonably expect the US to heed to their demand not to try to mediate the Kashmir issue with Pakistan, but they should not expect it to stay silent about large-scale Indian human rights violations or other policies that undermine conflict resolution there," the report said.

'US and India must take great care' Image: Shadows of Indian policemen are seen on a road in Srinagar
Photographs: Fayaz Kabli/Reuters

The US has legitimate strategic interests in urging both India and Pakistan to explore all prospects for normalising Indo-Pak relations and reducing the threat of violent extremism in South Asia and elsewhere, the report said.

It said Pakistani elites are adapting to the reality that their country cannot wrest the Valley away from India and that it must negotiate a formula to recognise the territorial status quo and improve the quality of life of Kashmiris on both sides of the Line of Control. Many Pakistanis recognise further that Prime Minister Manmohan Singh is the leader best suited to find and deliver a package that Indians, Kashmiris, and Pakistanis could live with, the report said.

"But if Pakistanis perceive that resolving the Kashmir issue will merely make the environment safer for India to bolster its conventional military advantage over Pakistan, they will balk," the report said.

"This is another reason that the United States and India must take great care to manage their defence cooperation in ways that reassure Pakistan that India's aims and capabilities are defensive, not offensive. Conventional military dialogue and confidence-building measures deserve greater attention for this purpose," it said.

'India is willing to fight to the last American' 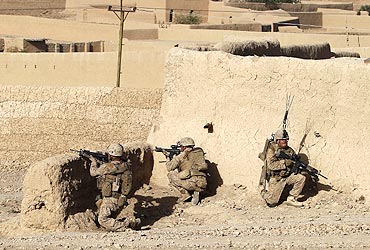 The report said one reason why Pakistanis are turning their attention away from Kashmir is that many see Afghanistan as the hotter front for Indo-Pak competition.

"Pakistanis, especially the military, perceive an Indian effort to extend influence throughout Afghanistan at Pakistan's expense. Pakistan has fought this influence in many ways, including attacks on the Indian embassy and other targets in Afghanistan," the report said. Observing that the US is caught in the middle, the report said Pakistan demands that Washington use its influence on its 'new best friend' India not to use Afghanistan to squeeze Pakistan.

"India demands that the United States fight the Pakistani-backed Taliban more robustly and eschew temptations to negotiate with the Taliban. India is particularly emphatic about Pakistan not being granted a seat in any possible negotiations," it said.

"Pakistan is willing to fight until the last Taliban or coalition foot soldier falls in order to pursue its interests in Afghanistan, while India is willing to fight to the last American to keep Pakistan from exerting indirect control over a future Afghan government," the report said.