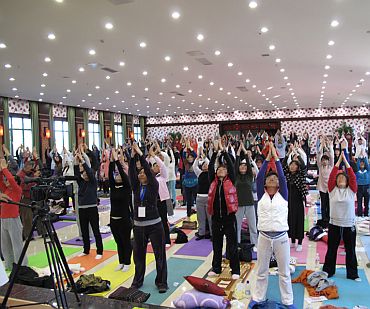 China looks to yoga to bring about "spiritual renaissance" for a calming influence on the people troubled by effects of globalisation and rapid economic changes, said a top Chinese official, as Indian spiritual guru Sri Sri Ravi Shankar opened his 'Art of Living' centre in Beijing.

"We hope to extend cooperation for your contribution for the health our people. We want to extend our support," Chen Hao Su, President of the state-run China Peoples Association of Friendship with Foreign Countries told the Indian Guru during their meeting in Beijing on Monday.

China wants to bring about "spiritual renaissance" to back up its economic success and look to yoga to bring about calming influence on the people, many of whom were troubled by effects of globalisation and rapid economic changes, he said. 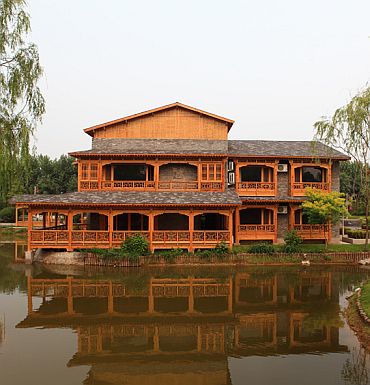 The government has offered its support to Sri Sri as yoga, the quintessential Indian spiritual and cultural form, is increasingly becoming popular in Beijing.

Yoga made an "official debut" in China as Sri Sri inaugurated his first 'Art of Living' centre at a sprawling Chinese resort on the outskirts of the capital with the sanction of the Chinese government on Sunday.

Chen underlined that "we have decided to continue this in future" as he invited Sri Sri to visit other cities to popularise yoga.

Yoga makes people calm down and come to terms with peace, said Sri Sri, the first Indian spiritual guru to have been permitted by China to set up a branch of his centre in China. 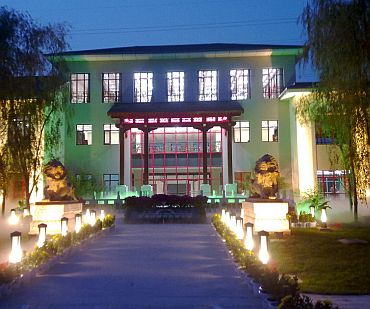 At the end of their pleasant meeting, Sri Sri was, however, perplexed over receiving a wooden carved gift titled 'Art of War' from Chen, which prompted him to respond that his message was all about "art of peace".

Sri Sri said judging from the response, many centres of Art of Living were expected to come up in several cities in China soon. 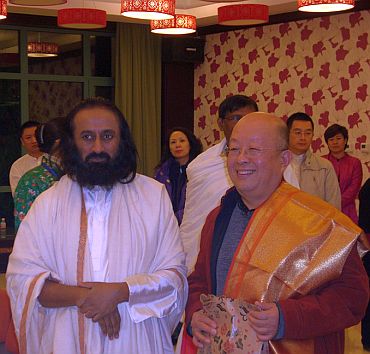 Yoga is not new to China, as yoga centers have come up all over the country ever since China began to liberalise spiritual and religious practices in recent years.

But this is the first time that a centre has been granted permission to operate.

"We do not plan anything. Things happen on their own," he said, recalling how Chinese organisers approached him to start the centre.

Yoga, Indian classical and Bollywood dances were becoming biggest cultural ambassadors of India in China even though the ties between the two countries moved at a slow pace. 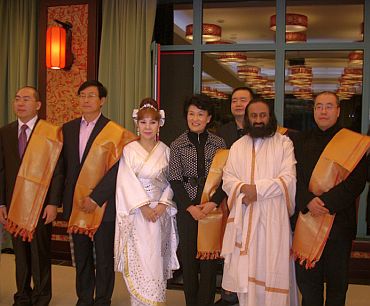 As the popularity yoga spreads fast in China, many complain of huge shortage of teachers and trainers and Sri Sri's centre was expected to fill this void to train a new generation of Chinese yoga teachers.

In addition to this, three yoga centres were being set up by different groups in Shanghai Anji and Xian with the assistance of the Indian government.

A yoga research centre was also expected to be set up in collaboration with the Chinese hospitals and universities next year.