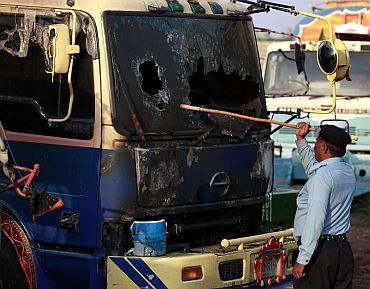 Image: A policeman looks at an oil tanker, carrying fuel for foreign forces in Afghanistan, after it was attacked and burnt in a field in the outskirts of Islamabad on October 4
Photographs: Faisal Mahmood/Reuters

The powerful Pentagon has been crawling before the Pakistan Army in its effort to reopen a crucial supply route, considered to be the lifeline of its thousands of troops in Afghanistan, which Islamabad had blocked last week following deaths of its three soldiers.

The top Pentagon leadership have either tendered an apology or regretted over the incident following, which Pakistan closed the Torkham gate.

In fact it is one of the rare instances of such apology and regret coming from a series of top US officials.

This is because a large part of US supply for its thousands of troops in land locked Afghanistan is routed through Pakistan. 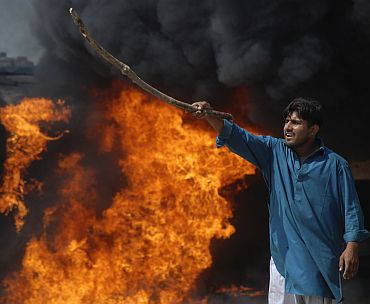 Image: A man tells others to stay away from a burning oil tanker on a highway near Shikarpur, about 39 km from Sukkur in Pakistan's Sindh province
Photographs: Nadeem Soomro/Reuters

The Pentagon says 50 per cent of its supply to Afghanistan goes through Pakistan and the rest through the alternative routes in the North that it has developed over the past few years.

Since Thursday, Pakistan had blocked the land route for NATO convoys carrying supplies to Afghanistan after officials blamed a cross-border NATO helicopter attack for the deaths of three Pakistani soldiers.

Pakistan, on the other hand, argues the US depends on 70-80 per cent of the supplies through its territory. 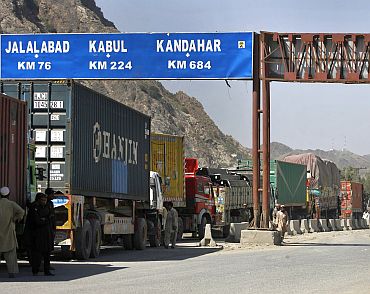 An investigation jointly carried by the US and Pakistan has been completed and the report is expected to be released soon.

Morrell said the US ambassador to Pakistan, Anne Patterson, has apologised to Pakistan for this incident.

It's one for which the Secretary-General of NATO has also expressed his deep regret, he added.

"It's has resulted in General (David) Petraeus (Commander of US and NATO forces in Afghanistan) and the Chairman of the Joint Chiefs (of Staff Admiral Mullen) making calls to (the Pak Army Chief) General (Ashfaq Parvez) Kayani and offering their regret, their condolences, their desire to work together to ensure this doesn't happen again," Morrell said. 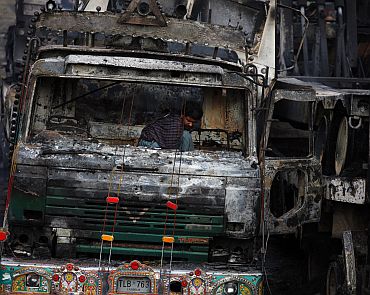 Image: A man searches through a damaged truck, carrying supplies to foreign forces in Afghanistan, after it was attacked and burnt in a field in Sangjani, located in the outskirts of Islamabad
Photographs: Faisal Mahmood/Reuters

"That was the offer that was extended in those conversations: to have Pakistani military representation in the investigation, full access to all the onboard cameras and the video, so that we could be as transparent as possible with them about what happened," he said.

"The Secretary (of Defense), of course, deeply regrets the incident, and is very much encouraging of his staff to work closely with the Pakistani military to ensure that we are devising ways to prevent this from happening in the future," Morrell said, even though he went at length to down play the reports in mainstream media about increasing tension and emerging differences between the US and Pakistan.

"What I would say about the relations is, incidents like this, unfortunately, do happen. There are occasional setbacks in our day-to-day relations -- this being one of them, the most recent of them. But there are mistakes. There are incidents, which create misunderstandings. There are setbacks. But that does not mean the relationship -- this crucial relationship to us -- is in any way derailed," Morrell argued. 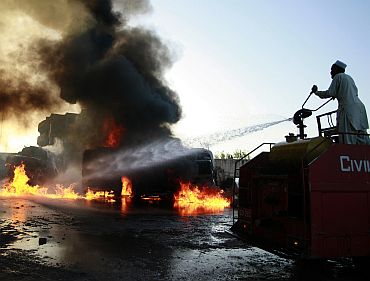 Image: A man tries to extinguish a fire after fuel trucks were set aflame in Peshawar
Photographs: Ali Imam/Reuters

From a military-to-military perspective, Morrell said the relationship is stronger than it ever has been.

Meanwhile, Pakistan has argued that reason for closure of the Torkham Gate was to protect the convoys.

In the aftermath of the cross-border assault and the killing of these three Frontier Corpsmen, that they thought it best to shut down the gate to eliminate the possibility of there being attacks as the convoys moved through that narrow passageway between Pakistan and Afghanistan, the Pentagon spokesman said referring to the explanation he received from Pakistan.

However, the closure of the Turkman Gate has resulted in more terrorist incidents, including the burning of the oil trucks waiting to cross the border.