Sign in  |  Create a Rediffmail account
Rediff.com  » News » India gets real about China, to upgrade Leh base 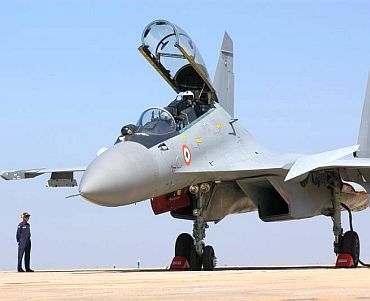 India will upgrade Indian Air Force's Nyoma advanced landing ground in Ladakh into a full-fledged air base closer to the borders with China to deploy its top-notch fighter jets, including the Sukhois there.

The proposal for modernising the compact airstrip at Nyoma, just 23 km from Line of Actual Control (LAC) with China, has gone to the Defence Ministry for approval, IAF's Western Air Command chief Air Marshal N A K Browne told a press conference in New Delhi on Friday.

"Nyoma ALG is to be expanded into a major base and a proposal in this regard has been sent to the government. The Defence Ministry is currently examining it actively. If the approval comes today, it would take about four years to get it ready as a major base," Browne said. 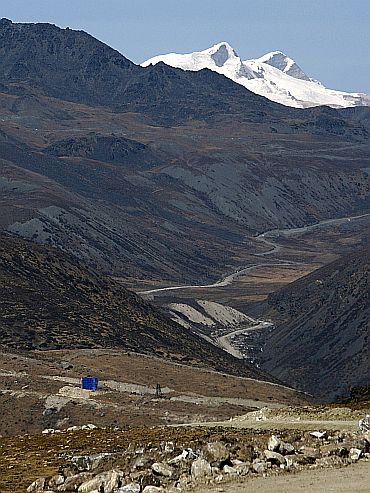 Image: A general view of the last Chinese army post is seen from the Indian side at the Indo-China border in Bumla, in Arunachal Pradesh
Photographs: Adnan Abidi/Reuters

"When we look at developing a base, in our view we have to be able to operate each and every platform of the Air Force at that base. It will not be confined to one or two types of aircraft alone," he said to a query if Sukhois could be deployed there permanently.

"We have to be able to operate (from Nyoma) fully with all our capabilities -- so fighter aircraft is part of the air force inventory," he said, explaining that all modern fighter planes of the IAF fleet were capable of operating from the 13,300-feet altitude airbase.

IAF had activated Nyoma in September last year when an AN-32 medium lift transport aircraft landed on the hitherto unused airstrip.

Defence Minister A K Antony had this June visited Nyoma to inspect the infrastructure development activities that are currently going on in the ALG. 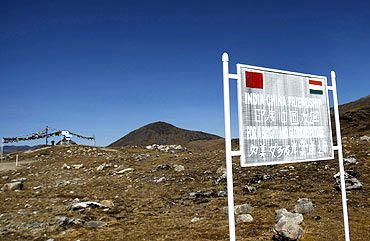 In the last two years, IAF has activated three such airstrips. The other two ALG activated in 2008 are Daulat Beg Oldi at 16,200-feet altitude and Fukche at 13,000 feet much closer to the LAC.

Though the IAF had claimed that the activation of the three airstrips was for providing transport link to remote parts of Ladakh to promote tourism, it is a well-known fact that the ALGs enhance the armed forces' capability to lift troops to the LAC much faster now.

However, Browne said no other ALGs would be developed any time soon, including Chushul in Ladakh that was being considered earlier.

Browne said Nyoma would provide the IAF an option for basing its potent aircraft in Ladakh region apart from Leh air base. 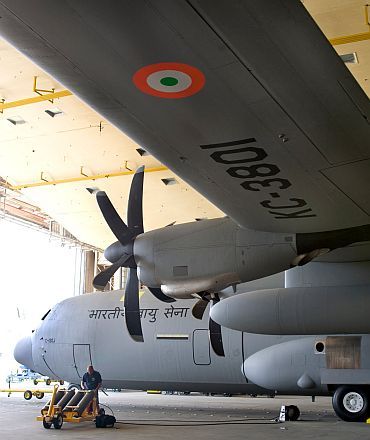 Nyoma was, in fact, a better option for deployment of fighter jets due to the weather and wind conditions there, he noted.

Browne said the Nyoma air base, as also Daulat Beg Oldi, would be capable of handling modern transport aircraft including the C-130Js bought from the US for Indian Special Forces and the C-17s for which orders have been placed with the Americans.

India is getting six C-130Js beginning next year, of which two would be based at the Hindon air base in Ghaziabad closer to the capital where infrastructure development works are on the verge of completion. It has also placed orders for 10 C-17 heavy transport aircraft with the US this year.

Asked if India not signing the Communications Interoperability and Security Memorandum of Agreement (CISMOA) with the US would impact the quality of technology that would come with the C-130Js and C-17s, Browne said the systems that IAF would get would be the latest, even without CISMOA, for which negotiations were going on between the two sides. 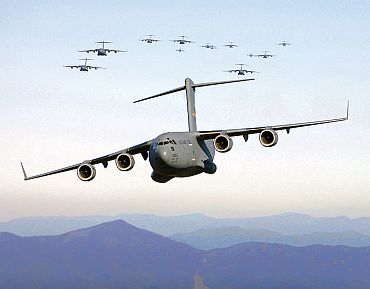 "It (not signing CISMOA) does not limit us. We can exploit the platform in any way we want to," he asserted.

Regarding China upgrading military infrastructure in Tibet, the Air Marshal said India kept a close watch on the developments, be it change in platforms, radars, sensors and missiles that were based closer to its borders, and its impact on the nation's security.

He said it was not just China's, but any other neighbour's change of plans in terms of its military deployments and infrastructure would be factored into India's security set up.

Asked if the IAF too was planning and changing its doctrines to factor in the two-front war against China and Pakistan as the Army was said to be doing, the Western Air Command Air Officer Commanding-in-Chief said the Air Force could not ignore the threats from both sides of the borders. 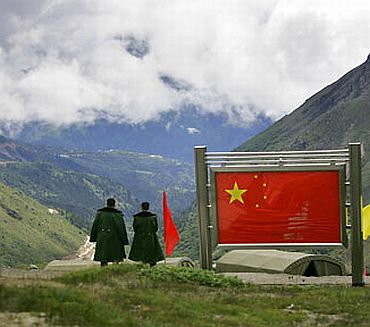 "We have both West and East borders. I cannot just focus on just one side and ignore the other. We have factored in all such scenario," he added.

Browne said IAF was also improving its air defence measures along both the borders in Jammu and Kashmir region by deploying more imported light-weight low-level radars.

The IAF, he said, was also buying some indigenous light-weight radars to be deployed in the region to have a robust air defence sensors system. "In the next two years, we will have enough sensors in that region," he added.

© Copyright 2023 PTI. All rights reserved. Republication or redistribution of PTI content, including by framing or similar means, is expressly prohibited without the prior written consent.
Print this
article
MOST
RECENT