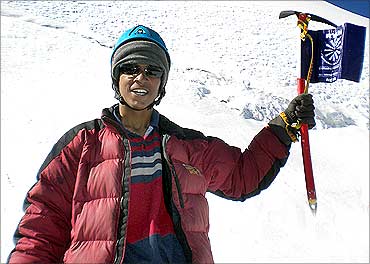 Image: At the top of Everest.

Literally, the world was at Arjun Vajpayi's feet last week when he became the youngest Indian to scale Mount Everest. Onkar Singh chronicles Arjun's ascent to the top.

Climbing the Mount Everest is no child's play. But for 16-year-old Arjun Vajpayi, it was. At the dawn last Saturday, the Noida lad scaled the world's tallest peak, becoming the youngest Indian to do so.

In fact, when Arjun scaled the 8,884-metre peak -- May 22, 6am Nepal time -- he was the youngest in the world to have achieved the unique feat. But the record did not last long as hours later a 13-year-old American boy, Jordan Romero, broke Arjun's record.

Young Arjun -- a Class XII student at Noida's Ryan International School -- may have scaled the Everest with ease, but back home his parents had been sending up silent prayers ever since he and eight others set out on the gruelling mission.

"We were waiting for the call right from early in the morning. Finally, when the call came, we were crying and laughing," said his parents, Sanjiv Vajpayi and his wife Priya, teeming with excitement.

Vajpai was accompanied by a 12-member team, among them three Indians. Nine of the 12 belonged to US, Denmark, Switzerland and Australia.

The boy who idolised Reinhold Messner 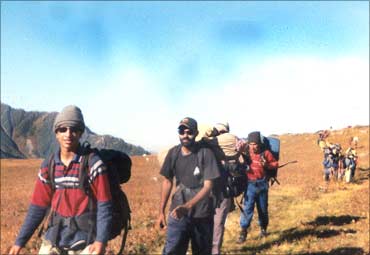 Arjun, the parents say, has in fact reached the peak almost two hours earlier than expected. Arjun was so keen to be there at 6am Nepalese time that he could view the sunrise from the Everest peak.

He did and later vividly described his experience to parents.

"The whole spread of white turned gold when the sun rose over the peak. It was truly a breathtaking experience," a thrilled Arjun told his parents after returning to the base-camp.

What was their advice to the son?

"W know that he has an obsession with the mountains. I told Arjun that at any stage if he felt it was too risky, he can come back. After all, there was nothing at stake," the father, a former Army officer said.

Vajpai has completed a basic course in mountaineering from the Nehru Institute of Mountaineering at Uttarkashi. Interestingly, it was only three years ago he was introduced to mountaineering.

It has become a habit 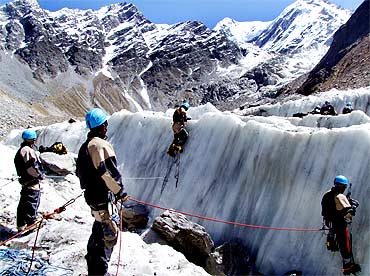 Image: Arjun and his team during the expedition

As the news spread, relatives, friends, teachers and classmates started converging at Arjun's home to congratulate them.

"We felt proud of Arjun. At the age of 16, he not only became the youngest Indian to reach the highest peak of the world, but he also became a legend in his own right."

"Arjun's instructors always told us he has all the qualities of a mountaineer. They were talking about his concentration," the parents reminisced.

Sanjiv Vajpayi and his wife Priya will now head to Kathmandu, where their son will be felicitated by the Nepal government. 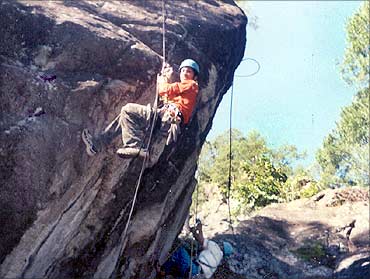 The Vajpayis, along with their daughter, will soon head to Kathmandu, where they will celebrate Arjun's glorious feat. Some of the teachers too are expected to reach Kathmandu.

"The Nepalese government will felicitate Arjun on May 29. We will come back to New Delhi on May 30," said the mother.

Even his boss Stephen did not believe Arjun would reach the peak before the expected time. "He was too focused and the energy level is just too high," Stephen said.

Priya says his son has imbibed the qualities of Arjuna, the famed warrior from the epic Mahabharata.  Like Arjuna, she says, her son too remains focused -- his eyes are always on the target.

For the record, Arjun broke the Indian record of 19-year-old Krishna Patil.

Records are meant to be broken. Are not they?